Start a Wiki
Abigail "Abby" Stevenson is an alternate officer in The Baby-Sitter's Club. Abby has a twin sister named Anna Stevenson and is the daughter of Rachel Stevenson and Jonathan Stevenson. Her father died in a car accident when she was nine years old. Abby has long, curly dark brown hair and brown eyes (she wears contacts), while Anna has short dark brown hair and brown eyes (she wears glasses). The twins look a lot like their mother. Abby and Anna were born on October 15th. It is not known what time they were born or which hospital. Abby made her first appearance in Book #89 Kristy and the Dirty Diapers. She became the alternate officer of the BSC in #90, a position she held until the end of the regular series.

Abby originally lived with her parents and twin sister in Long Island, New York but moved to McLelland Road in Stoneybrook, Connecticut when she was 13. Abby's father was killed in a car accident (he was hit by a dump truck and died instantly) when Abby was nine. She remembers finding out about the accident in school. As a child, their mother did not allow Abby and Anna to play with their food.

Abby has many allergies (dog hair, cat hair, litter, etc.) and often jokes that, "Life makes me sneeze." She has severe asthma and carries an inhaler around with her. Abby is very close to her mother and sister, but doesn't like to talk about her father much. Abby is like her father with a silly side and a good sense of humor. She is also very outgoing and athletic. Soccer is her favorite sport. She and Kristy have similar personalities, which has led to a variety of clashes. However, Abby is more laid back than Kristy but not nearly as organized, as shown when she temporarily took over as BSC President. Sometimes she gets annoyed at Anna's constant music playing. Abby is also Jewish and celebrated her Bat Mitzvah with her sister. She loves music (especially Aretha Franklin and Elvis Presley). When the BSC took a cross country trip (Super Special #15), Abby chose to visit Graceland.

Anna was asked to join the Baby Sitters Club along with Abby (who accepted), but she was too busy with her music, since she plays the violin and is in the SMS orchestra and wouldn't have time for both. This is the first time someone had declined an invitation to the Baby Sitters Club (besides Logan Bruno).

Abby's mother is a book editor and commutes to New York every day for work. Thus, Abby and Anna learned at a young age how to order take out on their own.

Abby had trouble laughing after her father died because he had a sense of humor and laughed a lot, and every time she laughed, she thought of him. Going to the Grand Canyon (Super Special #14 BSC in the USA) made her very sad at first because her family was supposed to take a trip out there, but her father died a few days before the trip, so it never happened. She does not like Valentines day. Gordon Brown used to like her, because he thought she was Anna. Abby wakes up to the Elvis Presley radio. She met the queen of England and stepped on the princes toe. Because of that, she was in a magazine. She was in a sunscreen commercial. She loves soccer and volleyball. In book 110, she played on a soccer team partnered up with disabled kids. One of her good friends outside of the club is Erin. In Long Island, her best friend was Elvira. She was in the Girl Scouts until her dad died. She has a couch in her bedroom. She has two inhalers, a regular one and an emergency one.

Abby and Anna with their dad as 2 year olds

Abby on her sixth birthday

Abby learning of her dad's death at 9 years old

Abby and Anna, age 10, with their mother 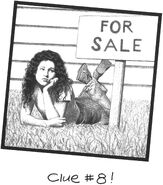 Abby next to her house's For Sale sign, seventh grade 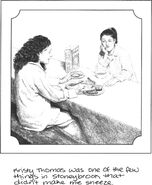 Abby's Scrapbook
Add a photo to this gallery

1995 'Name the Twins' contest - before Abby and Anna were introduced in book #89, a contest was held to create their names.

Planned but unreleased 1995 18" Kenner doll of Abby wearing her outfit from the cover of #90 Welcome to the BSC, Abby!
Add a photo to this gallery
Retrieved from "https://babysittersclub.fandom.com/wiki/Abby_Stevenson?oldid=16680"
Community content is available under CC-BY-SA unless otherwise noted.