Adam Pike is a member of the Pike Family. He lives with his family in Stoneybrook, Connecticut, where he was born. He is the most "boyish" and he is once called the "Terror of Slate Street" in Mallory's Christmas Wish.

In Claudia and the Middle School Mystery it's mentioned that he can be extremely wild.

Like all the other Pikes he has blue eyes and reddish-brown hair. In the graphic novels, he has brown hair and freckles.

He is one-third of the Pike triplets along with Jordan and Byron. Adam is the middle triplet; he is 40 seconds younger than Jordan and two minutes older than Byron in Claudia and the Lighthouse Ghost.

Adam has been complaining that they don't have enough Nintendo games in Mallory Hates Boys (and Gym). He got traded with the Hobart boys for one night in the book. He was great at the Hobarts house. When the triplets told Mr. and Mrs. Hobart about their Zuni pen pals, Adam talked about the plight of the Zuni people. Ben had described Adam as interesting. When Mallory made the archery team, he teams up with his brothers and makes her a cake that said "Mallory Congradulations" on it.

In Mary Anne + 2 Many Babies, he refuses to partner up with any of his sisters to be a "parent" to an egg. Adam acted as a single father.

Adam had the idea to have a neighborhood kickball game only to have mixed results. He tried to find a way to let Jenny Prezzioso play in the kickball game in Mary Anne and Miss Priss.

He shares Mallory and Vanessa's old room with Jordan after the events of The All-New Mallory Pike after arguing over the room arrangements after Mallory left.

He helped run the sledding booth in Abby's Twin.

Adam scared Claire into thinking that vampires were real. This kept Claire from going near the movie set in Kristy and the Vampires.

Adam is portrayed by actor Valen Peyton. This is the first time someone plays him on screen. 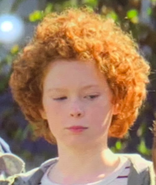 Where he likely got his name from Baby-sitters' European Vacation
Community content is available under CC-BY-SA unless otherwise noted.
Advertisement