Andrew Brewer is a minor character and BSC charge in The Baby-Sitters Club series and a more prominent character in the Baby-Sitters Little Sister series. Sometimes he's called Andy, like in Kristy's Great Idea by his father. He is 4-5 years old and Kristy Thomas' stepbrother and Karen Brewer's brother. He is a member of both the Engle Family and Brewer/Thomas Family.

﻿Andrew is shy, quiet, and doesn't talk much. Andrew gets scared easily and doesn't like Karen's scary stories. He has traveled quite a bit for someone of his age. He went on a cruise to Disney World in Super Special #1 Baby-sitters on Board! and he went to Shadow Lake in Super Special #8 Baby-sitters at Shadow Lake. Andrew is close with his family but his parents' divorce upsets him, as revealed in #1 Kristy's Great Idea. Andrew sometimes has his thumb in his mouth, such as in #6 Kristy's Big Day.

A fair bit of Karen's stories involve Andrew. For example, in Book #7 Claudia and Mean Janine, Karen made up a story that at a certain time of day, Andrew would turn into a monster. Also, in #12 Claudia and the New Girl, Karen tried to convince people that Andrew was going to grow hair all over his body.

Andrew says 'Yup' to everything in #1 Kristy's Great Idea, probably because he was nervous or shy. He doesn't like being the center of attention. Andrew didn't want to be the 'Flower Boy' in the wedding in Kristy's Big Day. Andrew gets embarrassed easily. He is usually the bellhop or the sailor in Let's All Come In. He likes swimming in the lake. He likes peanut butter and jelly sandwiches. He used to take naps.

David Michael helps him build a baseball card collection in Kristy at Bat.

He won the most determined award at the BSC mini olympics in Jessi's Gold Medal.

He was in Kristy's group when the BSC took their clients to Sudsy's Carnival in Kristy and the Mother's Day Surprise.

In Karen's Christmas Carol he played Tiny Tim in the Stoneybrook Community Center's production of The Christmas Carol. He was really good and got a lot of attention. Karen Brewer was jealous when he didn't need her help anymore. Andrew was leaving Karen little gifts throughout the book as well.

He is a good skier in Karen's Ski Trip and the best in his class. Andrew got injured while skiing leaving Karen to rush to him. His injury helped her learn how to ski.

In Karen's Unicorn he learned how to ride a two wheel bike with Karen's help. He and Karen rode too far and ended up at a mini mall. This is where Seth Engle eventually sets up his carpentry business.

In this series he is played by actor Noah Fleiss. He is only in the episode Mary Anne and the Brunettes.

Andrew is portrayed by both Cody Kolson and Sebastian Billingsley-Rodriguez in Season 1. Between the two of them Andrew is in four of the ten episodes in the first season. Troy Edmondson plays Andrew in Season 2.

Kristy, Andrew, and Emily Michelle listen as Watson tells them about Shadow Lake. 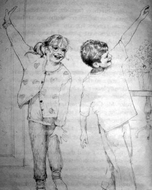 Karen and Andrew pretending to ice skate around the house in Karen's Figure Eight.

Book of Laughs
Community content is available under CC-BY-SA unless otherwise noted.
Advertisement