Ann M. Martin (born on August 12th, 1955) is the author of The Baby Sitters Club series. She was born in Princeton, New Jersey, and is a graduate of Smith College. She now lives in the Hudson River Valley area of New York State. Ann used to be an editor of children's books and is now a full-time writer. Ann also used to be a teacher.

Ann has four cats, Gussie, Ollie Pippen, and Woody, and a dog, Sadie. She used to have two cats, Mouse and Rosie.

Ann likes the TV show, I Love Lucy and likes the beach and ice cream. She hates to cook. Ann did a lot of baby sitting (right through till college!) and finds writing about baby sitting fun...and easy, since she did a lot of it herself. Ann likes reading and knits clothes for children in need. She loves sewing and needlework.

Ann's best friend growing up was the model for the character of Kristy Thomas, while Ann based Mary Anne Spier on herself. Claudia and Janine's relationship was based on the relationship that Ann had with her own sister, Jane, growing up, with Ann in Janine's role and Jane in Claudia's role. Ann names her characters in many ways : she either chooses names of people she knows or chooses names she likes. Kristy is her favourite Baby Sitters Club member. All the members of The Baby Sitters Club are fictional characters.

Many of the ideas for her books come from personal experiences, while some are based on childhood memories and feelings. Some are about contemporary problems or events.

Photo of Martin sent to Baby-sitters Club fans after they sent a fan letter to her, probably circa early 1990s.

Martin next to the original Kristy's Great Idea cover image in her apartment in 2009.

Bio from the first newsletter of the Baby-sitters Collectors Club. 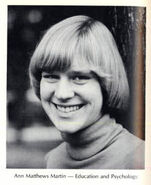 Martin signed one book per fan on the 1994 BSC World Tour in malls nationwide February - May 1994.
Add a photo to this gallery

The end of each California Diaries ebook, produced by Open Road Media, included a mini autobiography with pictures entitled "A Personal History by Ann M. Martin".

1998 with dog Sadie, one week after bringing her home.

Retrieved from "https://babysittersclub.fandom.com/wiki/Ann_M._Martin?oldid=17778"
Community content is available under CC-BY-SA unless otherwise noted.