Who needs baby-sitting when there are boys around! (original)

Why is Stacey acting like her crush is more important than the BSC? (2020 reprint)

Stacey and Mary Anne are baby-sitting for the Pike family for two weeks at the New Jersey shore. Things are great in Sea City. There's a gorgeous old house, a boardwalk, plenty of sun and sand... and the cutest boy Stacey has ever seen!

Mary Anne knows that Scott the lifeguard is way too old for Stacey, but Stacey's in love. She fixes Scott's lunch, fetches his sodas, and spends all her time with him... instead of with the Pike kids.

Suddenly Mary Anne's doing the work of two baby-sitters, and she doesn't like it one bit. But how can she tell Stacey that Scott just isn't interested—without breaking Stacey's heart?

Stacey and Mary Anne go to Sea City with the Pikes as mother's helpers. While there, Stacey falls for a cute-looking lifeguard named Scott. Stacey spends all of her time trying to get Scott's attention leaving Mary Anne to look after the Pike kids without her.

On Stacey & Mary Anne's night off, Stacey decides to buy Scott a heart-shaped box of candy, but is devastated when she sees him kissing another girl, who is his girlfriend. Stacey later meets a guy named Toby, who is the cousin of Alex, another mother's helper. After Stacey, Toby, Mary Anne, and Alex go on a double date, Stacey gets her first kiss in the Tunnel of Love.

When I was growing up, my family often took a trip to the New Jersey shore in the summer. Many summers, we went to Avalon, New Jersey. So did my best friend, Beth, and her family. But two summers my family went to Surf City.

The fictional town of Sea City is based partly on Surf City and partly on Wildwood, the town next to Avalon. And some of the incidents that take place in Sea City are based on experiences that Beth and I had when we were in Avalon. For example, we thought it was fun to attract the attention of the lifeguards—who were much older than we were!

There was a little tiny boardwalk with some shops and an arcade where Beth and my sister, Jane, and I played Skee-Ball. Every time we scored points at Skee-Ball, we won coupons that could be turned in for prizes, like keychains and small stuffed animals. The summers at the beach were a long time ago, but now I can think about them every time I write a Baby-sitters Club book about Sea City. 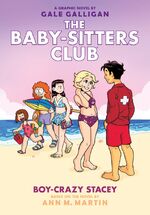 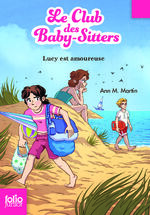 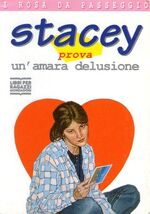 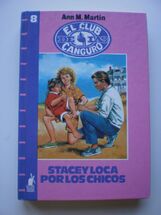 French cover by Émile Bravo for Boy-Crazy Stacey, Stacey's Mistake (?), and Dawn on the Coast

Hungarian cover for Claudia and Mean Janine and Boy-Crazy Stacey
Community content is available under CC-BY-SA unless otherwise noted.
Advertisement