The Baby-Sitters Club Wiki
Register
Don't have an account?
Sign In
Advertisement
in: Families, The Thomases, The Brewers, BSC clients

The Brewer/Thomas family is a family that lives at 1210 McLelland Road in Stoneybrook, Connecticut.

The house is three miles from the Kishis' residence and is four minutes away from the train station. In Karen's School Bus she mentions that she lived just far enough for a bus ride, implying that the school is close.

In Abby's Un-Valentine, Kristy mentions that her mom and Watson were not ready to get any new pets.

The house has four floors, the fourth is an attic and the third is largely unused. Karen describes the house as the "big house" when she stays with her father. According to Karen, the ghost of Ben Brewer (Kristy's great-great grandfather) is said to haunt the bedroom on the third floor and the attic. Charlie installed an intercom system for Watson while he recovered from his heart attack. The system is set up in the kitchen, Watson's bedroom, living room, and Watson's' library.

David Michael, Karen, Andrew, and Emily Michelle all share a bathroom. There's a sunroom on the back of the house.

The living room is described as gigantic with a grand piano (Steinway brand mentioned in Kristy and the Dirty Diapers), a little tree, three couches, five armchairs, a long glass coffee table, several end tables and a crystal chandelier. Instead of carpeting, the room has Oriental rugs. It also has floor to ceiling windows that look out into the front lawn.

The family room is described as "always on the messy side."

The kitchen is described as old & country with a big parson's table & two long benches. The countertops are covered with blue & white tiles. Copper pots hang from the wall and the curtains match the wallpaper.

The mudroom is where the family gets dressed for the winter weather and where Shannon's leash is hung up.

Andrew, Charlie, David Michael, Emily Michelle, Karen, Kristy, Nannie, and Sam all have their own bedrooms, but Elizabeth and Watson share a bedroom.

In The Fire at Mary Anne's House, when the Spier/Schafer Family stays with them it's mentioned that Sharon and Richard share a room that has a bathroom attached to it. Mary Anne and Dawn also share a room.

Watson's library is described as a dark, peaceful comfortable place with cushy leather chairs, thick rugs, china lamps, a big wooden desk and shelves of books. The room has a nice smell to it: like Lemon Pledge and musty books. A stepladder makes the upper shelves accessible.

The attic is located on the fourth floor- room after room- and is big with rafters that Kristy has to duck under. The attic is filled with old furniture covered in white sheets along with a brass doll's bed & a rocking horse.

A basement is mentioned in Claudia's Freind Friend where David Michael pulls a prank on Stacey McGill.

The house has a big backyard with a great climbing tree, playground set and tons of outdoor games in the garage. Watson has a rose garden, vegetable patch, and the garden has daffodils. In Karen's Pumpkin Patch, Watson also grew pumpkins in the fall. In Kristy Thomas, Dog Trainer it's mentioned there's an invisible electric fence around the background. There's a shed and a large front porch in Kristy and the Worst Kid Ever.

The side yard is big enough to form an informal baseball diamond in Kristy at Bat. There's a new playhouse in the backyard mentioned in The Fire at Mary Anne's House.

Karen mentions that there's a detached garage behind the trees and gardens. The driveway in the front wins around to the side of the house and leads to the garage in Karen's Cartwheel. Together Karen, Hannie Papadakis, and Nancy Dawes clean out the garage.

Watson has an old black Ford. The emergency car is parked in the shed at the back of the property.

In the garage, there is a red sports car, a fancy new car and the Thomases' green station wagon which has four-wheel drive. 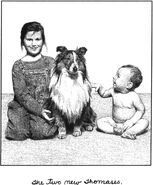 Kristy at 6 years old with David Michael and Louie Thomas 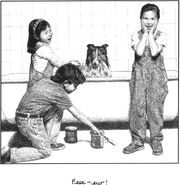 Elizabeth and Kristy at 6 years old

#74 Kristy and the Copycat

Places in the House

The BSC with Kristy in her bedroom.

Part of the the kitchen

Part of the kitchen
Community content is available under CC-BY-SA unless otherwise noted.
Advertisement