Hamilton "Buddy" Barrett is an eight year old BSC charge in third grade who is the older brother of Suzi Barrett and Marnie Barrett, the son of Natalie Barrett, and the stepson of Franklin DeWitt. His stepsiblings include Lindsey, Taylor, Madeleine, and Ryan Dewitt. He is a member of the Barrett/DeWitt Family. He makes his first appearance in Dawn and the Impossible Three.

Buddy is described as an active and lively kid that's skinny with big knobby knees and a mischief maker.

In Mallory and the Mystery Diary he wasn't reading at the proper reading level. Mr. Moser is his third grade reading teacher. Buddy says he hates flashcards amost as much as he hates Mr. Moser. Mallory Pike tutors him successfully by introducing him to comics books to make him a better reader. He moves from the lowest reading group to the middle reading book in his class.

He figures out that the moondust they ordered through the mail is a lie. He and the other do traveling salesmen show to earn money in Stacey's Choice.

In Maid Mary Anne he gets into fights over his participation in Mary Anne's sewing class. He goes overboard in proving his masculinity.

His favorite sitter is Dawn.

In the graphic novels Edit

Buddy appears in the graphic novel version of Dawn and the Impossible Three. He has black hair. 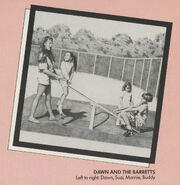 Add a photo to this gallery
Retrieved from "https://babysittersclub.fandom.com/wiki/Buddy_Barrett?oldid=21934"
Community content is available under CC-BY-SA unless otherwise noted.