Byron Pike is a member of the Pike Family. His parents are John and Dee Pike. He is one of the Pike triplets, along with Adam Pike and Jordan Pike. Jordan also has a younger brother, Nicky Pike, and sisters Margo Pike, Mallory Pike, Claire Pike, and Vanessa Pike. He lives with his family in Stoneybrook, Connecticut, where he was born.

Byron is "quieter more sensitive and serious" than the other triplets, according to Stacey in Boy-Crazy Stacey. In Jessi's Baby-sitter he's described as practical. In Welcome Home, Mary Anne, Mary Anne says that he's more thoughtful than his brothers. Claire calls him the nicest of the triplets in Stacey's Problem. In Claudia and the Middle School Mystery, it's mentioned that his feelings gets hurt easily and he is calmer then Jordan and Adam.

While he likes to pick on Nicky with the other triplets, he still gets along with him. In The All-New Mallory Pike he is okay with sharing a room with Nicky away from Adam and Jordan. He ends up moving into Margo and Claire's old room with Nicky.

In Stacey's Problem, he is shown stepping up and helping his younger siblings with their homework since Mallory had left. Going so far as making everyone do their homework as soon as they got home. He wants to be the biggest big brother of all of them.

In Mary Anne + 2 Many Babies, he partners up with Vanessa to be his fake wife to parent an egg.

In Mallory Hates Boys (and Gym), he got traded with the Hobart boys for one night in the book. He was great and told Mr. and Mrs. Hobart about how he came up with the idea to start his own lending library. When Mallory made the archery team, he teams up with his brothers and makes her a cake that said "Mallory Congradulations" on it.

Byron skipped an important game to baby-sit his siblings in Dawn and Too Many Sitters. Mallory was grateful for the help despite him really wanting to play. In the book he thought of the idea of Baby-sitters in training.

He is portrayed by actor Brock Brown in this version. This is the first time he has someone play as him.

Byron is only in one episode Boy Crazy Stacey (Web Series Episode). He has a small brief crush on Stacey McGill in the episode. Stacey lets him down gently.

In Hello, Camp Moosehead! Part 2 (Web Series Episode) Mallory mentions that he runs away when he feels anxious. A role that will usually go to Nicky such as in The Ghost at Dawn's House. 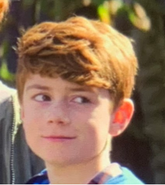 #98 Dawn and Too Many Sitters
Community content is available under CC-BY-SA unless otherwise noted.
Advertisement