They wish they all could be...

Who would believe it — the Baby-sitters have won the lottery! And with their winning money, the girls are all going with Dawn to...California!

What adventures they have. Jessi lands a (tiny) part in a TV show, Kristy gets into a kind-of fight with Dawn's We Love Kids Club, and Stacey turns into a surfer girl! And in between all that excitement, they still have time for baby-sitting, sight-seeing, and the beach.

How can they go back to Stoneybrook now that they've been turned into California girls?

Early in the book, the BSC members give Mrs. Schafer money to buy a lotto ticket. The girls end up matching 5 out of the 6 numbers and win a cash prize, which they decide to spend on a club trip to California. 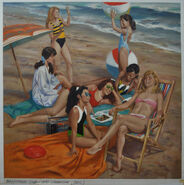