Cecelia Parker (or Aunt Cecelia) is the paternal aunt of Jessi Ramsey. Her younger brother is Jessi's father John Ramsey.

She is about fifty or so. Jessi says she always looks like she ate a lemon. She is not naturally thin.

In Jessi's Baby-sitter, she moves in with the Ramseys to help take care of the house and kids after Jessi's mother, Janice Ramsey goes back to work.

Cecelia lived in Oakley, New Jersey until her husband, Steven passed away & she moved to Queenstown, Connecticut. At first, Aunt Cecelia was strict with Jessi and Becca which causes the girls to play pranks on her. After a family meeting, Cecelia says that she was worried that she wouldn't be as good of a sitter as Jessi and that she only wants the girls to grow up well.

Cecelia has a son named Michael Parker, who lives in Brooklyn, New York with his wife, Marian. She is very supportive of Jessi's pursuit of ballet. She wears thick, smelly perfume and her lips are constantly pursed (according to Jessi). She drives a Volkswagen and has a friend named Mr. Major. In #82 Jessi and the Troublemaker, Jessi & Becca thought that Cecelia and Mr. Major were getting married, but they're not. In book 103, she got in a car accident. Her neck got injured from whiplash and she sprained her ankle.

In Stacey and the Fashion Victim, she occassionally smokes sometimes but she never does it in public. She participated in the Stoneybrook Smokeout, organized by the BSC. Cecelia had signed a pledge in front of Jessi and Becca.

Her husband Steven has already passed and she misses him very much. In addition to John Ramsey, she has two other brothers, Arthur and Charles. 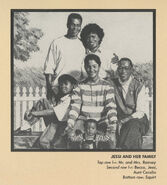 #36 Jessi's Baby-sitter
Add a photo to this gallery
Retrieved from "https://babysittersclub.fandom.com/wiki/Cecelia_Parker?oldid=21104"
Community content is available under CC-BY-SA unless otherwise noted.