Charlotte Theresa Johanssen is an eight-year-old for whom the Baby-sitters Club regularly sits for in Stoneybrook, CT. She lives with her family in Stoneybrook, Connecticut, where she was born and a member of the Johanssen Family. She narrated a chapter in Graduation Day. She's very close to Stacey McGill.

Charlotte is described as having thick chestnut brown hair, big dark eyes, and a dimple in her cheeks when she smiles. She doesn't think that she's pretty. In Mary Anne and the Little Princess her hair is once described as red. It's noted that she doesn't have pierced ears in Stacey and the Mystery Money. Stacey says she has extremely pale skin in Stacey vs. the BSC.

Charlotte used to be very shy and sometimes still can be. While she becomes more outgoing and makes more friends, she doesn't stop being sweet and bookish. Dawn Schafer mentions that she's a very deliberate kid in Beware, Dawn! and think about each move for about ten minutes when playing board games. She is noted to be organized in Stacey vs. the BSC.

She was having problems in school, being called "Teachers Pet" by the students in her class. Her schoolwork was too easy for her and she skipped second grade into third grade in The Truth About Stacey. As of Logan Likes Mary Anne!, she was in fourth grade.

Stacey considers her a little sister. Charlotte's upset when Stacey moves back to New York and excited she comes back. When Charlotte's parents are away in Stacey and the Mystery of Stoneybrook, she stays over at Stacey's house. Charlotte gets very worried about Stacey after Stacey ends up in the hospital in Stacey's Emergency, and briefly becomes a hypochondriac.

In Little Miss Stoneybrook ...and Dawn, Claudia convinces Charlotte to enter the Little Miss Stoneybrook Pageant. Charlotte isn't enthusiastic about the idea due to her personality and believing that she isn't pretty enough to win. She decides to memorize part of a story and act it out for the talent part. When pageant day comes, she gets scared, and leaves the stage during he contest. Claudia feels bad for pushing her into participating and and apologizes to her.

In Jessi's Gold Medal she doesn't want to be in the BSC mini-Olympics. Charlotte becomes the official sign-maker and wins the most creative award.

She's part of Dawn and Stacey's Save the Planet Class. She and Becca Ramsey decorate and sell canvas shopping bags for the Green Fair in Dawn Saves the Planet.

Charlotte's supposed to stay away from sweets. She had two cavities last time she was at the dentist. She had two silver fillings in her molars to prove it in Beware, Dawn.

She plays basketball (despite disliking it) with her friends in Claudia and the Little Liar. In the same book Charlotte is mentioned to keep a diary and will sometimes let Stacey read it.

In Claudia and the Phantom Phone Calls she mentions that one time she was hiding from a thunderstorm under her bed. It lasted so long she fell asleep and her parents nearly called the police when they couldn't find her.

In The Secret Life of Mary Anne Spier, she gets a fashion maker where she prints a fabric design on fabric to use. The participates in the fair that the BSC holds for the Toys for Kids program.

She writes the cheers for Kristy's Krushers' cheerleaders. Charlotte eventually becomes a cheerleader for the Krushers. She even cheerleads for the Special Olympics Unified Team in Abby the Bad Sport.

Charlotte thought of the gift basket idea for the residents at Stoneybrook Manor in Get Well Soon, Mallory!.

She was in Stacey's group when the BSC took their clients to Sudsy's Carnival in Kristy and the Mother's Day Surprise.

She went to Paris with her mom in Stacey and the Mystery at the Empty House.

In Kristy and the Cat Burglar, Charlotte went through her "Harriet the Spy" phase. Instead of writing things down she was recording her notes. She got caught by her friends and things were patched up between them by the end of the book.

She wrote a short book called The Girl Who Moved Away which she gives to Stacey at her yard sale in Good-bye Stacey, Good-bye. Charlotte was really upset when Stacey moved and even asked for Claudia to sit for her since she's Stacey's best friend in Little Miss Stoneybrook ...and Dawn.

She has a crush on Bruce Cominsky in Stacey's Big Crush who ended up liking another girl after bugging her so much. She liked the attention at first but eventually started to hide from him.

Charlotte thinks of giving Mary Anne Spier a surprise party in Logan Likes Mary Anne!. When Stacey tells her that she doesn't like surprise parties, she suggests the surprise cake.

She attended the BSC's play group in Claudia and Mean Janine

In this series she is portrayed by actress Gina Gallagher. She is in six of the thirteen episodes. In The Baby-sitters' Special Christmas she kisses Jackie Rodowsky on the cheek. In Stacey's Big Break, she still has a special connection to Stacey and she has a hard time going on stage without her there keeping her stage fright.

She is played by Naomi Tan in the Netflix adaptation. In the Netflix series Charlotte is portrayed as Chinese (her actor is Chinese), in previous versions (TV, movie, and the book) she is white. She is only in The Truth About Stacey (Web Series Episode). Her mom is black, so she may be adopted, or her other biological parent might be Chinese. Her mom is dating a woman, but they are not married, so Charlotte biological parents may be divorced.

#3 The Truth About Stacey (ebook with reprint cover image)

#3 The Truth About Stacey original cover

Charlotte saying good-bye to Stacey with Claudia and Dawn

#35 Stacey and the Mystery of Stoneybrook

Mystery #10 Stacey and the Mystery Money

#70 Stacey and the Cheerleaders 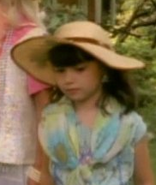 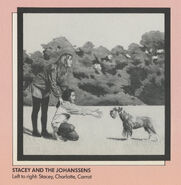