Dawn thought she had escaped the Stoneybrook Middle School assignment of writing her autobiography, only to find that Janet Granger, her first period English teacher at Vista Private School had assigned the same assignment. Dawn recollects some of the most important parts of her life not chronicled in the BSC series. Dawn received an A- for content and a B for presentation on her finished project.

I thought I had escaped having to write my autobiography at SMS. But no! I move all the way back to California, and what do I find? My English teacher assigned the very same project.

So here I am with lots of memories of both California and Connecticut. There was the time I met my future best friend Sunny and thought she was a weirdo. And there were baby-sitting adventures, like the day I was a hero, and the day I really blew it.

Now that I'm finished, I'm kind of glad I had to write my autobiography. You know what? I've had a pretty interesting life!

Dawn details her life from birth until age seven in this section. She recalls how she seemed to be born for the beach. Her most potent memories from this time are the moment Jeff is born (when she becomes rather jealous of him for taking her parent's affections away from her) and when she was in nursery school with her friend Ruthie Robillard . Dawn and Ruthie both loved the Madeline books and playing with blocks. Each day they would build a block model of Paris only to have two boys Harry and Jackie come kick it over. One day they used their school glue on the blocks so when the boys came to kick it over, the blocks didn't crash everywhere. Dawn and Ruthie had to wash off all the blocks, which Dawn didn't consider punishment because she got to play in the water.

Part 2: The New Girl on the Block

When Dawn was seven, a new girl, Sunny Winslow, moved into the house two doors down from her. Dawn remembers that the family seemed rather strange with hippie clothing, flowers painted on their car, etc. Sunny and Dawn end up playing together a little bit every day but Dawn is wary of the strange new girl and her strange ways. For instance, Sunny didn't have a TV nor did she play with Barbies. One day, their mothers take the girls shopping at Bamberger's Department store. Dawn decides to take Sunny to the second floor to look at Barbies while their mothers look at housewares on the sixth floor. Suddenly a storm comes and the power goes out but Sunny is rather calm about the entire situation. Sunny takes charge of the situation and helps the girls find their mothers, who were stuck in an elevator due to the storm. From that moment on, Sunny and Dawn considered themselves best friends.

When Dawn was about ten years old, her grandparents, Rita & Charles Porter (Granny & Pop-pop), celebrated their fiftieth wedding anniversary. Dawn's family decides to surprise them by taking a family vacation to San Francisco. Dawn remembers seeing her grandparents bicker about different things and worrying that they weren't in love anymore. She also recalls her parents acting very happy and very much in love with kisses and hand holding. She and her family tour the city, including Chinatown, Fishermans Wharf, and Steinhart Aquarium. On the night of the anniversary party, the family eats dinner at the revolving Equinox restaurant on the top of the Hyatt Regency hotel. Dawn and Jeff give their grandparents frames with their school pictures, Jack & Sharon give them the trip to San Francisco and tickets to see the opera in New York, Rita gives her husband an engraved watch and Charles gives Rita a ring, mimicking the time he asked her to marry him. Dawn doesn't say it specifically, but this seems to be one of the last times she can recall seeing her parents so happy and in love.

Dawn's parents were on the downward slide of their marriage the year she turned twelve. That also happened to be the year that Dawn was terrified of her house burning down. Dawn spent a lot of time going over fire safety with her family, including one middle of the night impromptu fire drill. One day, she baby-sat for her next door neighbors Clover & Daffodil Austin when she noticed the smell of smoke in the Austin kitchen. Dawn calmly took charge of the situation and got the girls out of the house and to her house next door. She called the fire department and Mrs. Austin while keeping the girls calm. The fire department came and put out the fire, confining damage only to the kitchen. The fire was caused by a faulty wiring circuit. As a result of her efforts, Palo City awarded Dawn with a Community Hero medal.

Part 5: A New Life on the East Coast

After her parents divorce, Dawn moves with her mother and brother to Stoneybrook. Dawn hadn't been a member of the The Baby-Sitters Club for very long when she takes a job baby-sitting for Sandra Lazar. Dawn baby-sat for the Lazar family twice but did something she was not proud of. On her first day baby-sitting for the family, Dawn finds a letter from Stoneybrook Elementary School stating Sandra will have to repeat second grade. Dawn inadvertently tells Sandra this. Mrs. Lazar finds out that Dawn had been reading their mail and never calls the BSC again for a sitter. Dawn is not proud of this. In fact, her autobiography is the first time Dawn has spoken of the situation. 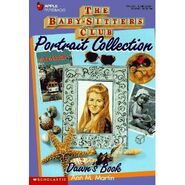 Thank you letter to Dawn from Clover Austin and Daffodil Austin.
Community content is available under CC-BY-SA unless otherwise noted.
Advertisement