Edward McGill is Stacey McGill's father and Maureen McGill's ex-husband. He works as a corporate lawyer and lives in New York City. He has a brother named Eric McGill who is married to Carla McGill and a niece named Cheryl McGill.

Maureen notes that he's not good at talking about his emotions in Stacey's Lie and is non-confrontational, would rather sidestep an issue than fight about it. He tends to beat around the bush rather then being direct in Stacey's Broken Heart. In New York, New York!, Kristy notes that he's kind of sloppy. He has a habit of just announcing what he wants to do instead of asking.

Edward and Maureen McGill divorced in book #28, Welcome Back, Stacey!, citing irreconcilable differences. Ed and Maureen had been married for fifteen years previously. A fight Stacey overhears suggests that Edward was angry at Maureen, who did not work at the time, for spending money in way he didn't approve of, while Maureen was angry at Ed for working too much and appearing to care more about money than his family.

He took Stacey to see her first Broadway show, Annie.

Ed breaks an ankle on a vacation to Pine Island in Stacey's Book.

When Stacey leaves early he gets upset. Stacey plans a special award ceremony and certificate for the fantastic father award. He hires a visiting nurse from Stamford, Miss Koppelman, to stay with Maureen, when she had pneumonia in Stacey's Choice. In the book he was also promoted.

In #76 Stacey's Lie, Ed revealed to Stacey that he had a girlfriend named Samantha Young and they later become engaged in the Friends Forever series. In Stacey's Broken Heart, she notes that this is the first woman her father has dated since the divorce.

Early in his career, Edward worked as a public defender (Stacey McGill... Matchmaker?), but at some point he switched to the more lucrative field of corporate law. For unknown reasons, he was transferred from the New York to Stamford offices shortly before the events of book #1, Kristy's Great Idea, and transferred back to New York in #13, Good-bye Stacey, Good-bye. He was made vice-president of his firm in #58 Stacey's Choice. He is known as a workaholic and often goes to the office on weekends and brings work to do on family vacations.

In Stacey the Math Whiz, Ed was fired from his job when the company downsized. He bought a car and was staying in Stoneybrook at Strathmoore Inn for a few days to spend time with Stacey. He finally gets a new job where the pay is a little lower but it's closer to his apartment.

He is played by Michael Tomlinson and only appears in the episode Stacey Takes A Stand.

Edward is played by Peter Benson and appears in two episodes. 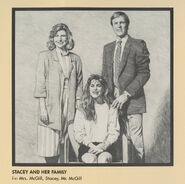