Scholastic
Graduation Day is the second Super Special and last book in the Baby-sitters Club: Friends Forever series by Ann M. Martin. It concludes The Baby-Sitters Club series as the characters graduate from Stoneybrook Middle School.

It's the day the members of the BSC had thought would never come – the day they graduate from Stoneybrook Middle School. Kristy is worried that this will mean the end of the BSC. Mary Anne realizes she has to set things straight with her ex-boyfriend, Logan. Stacey is stressed about her parents, and Claudia isn't sure she'll be allowed to graduate at all.

As graduation day comes closer, all the past and present BSC members come together to share their stories of Stoneybrook and the BSC. It's time for them to say good-bye. But their memories and their friendships will last forever.

It’s the end of the school year and this time, the girls are actually graduating 8th grade and moving on to high school. They all feel a little differently about this, but each has their own emotional angst to deal with. Mary Anne seems excited about graduation, but feels like she still has unfinished business with Logan. At the end she and Logan talk and decide they don’t like avoiding each other all the time.

Meanwhile, Claudia’s worried about whether she’ll pass her finals. Ultimately, she passes everything except Science. She’s still allowed to participate in the graduation ceremony, but will get a blank diploma and will have to go to summer school. Stacey’s worried about her parents both being at the graduation ceremony and thinks they’ll fight, or that things will be awkward with her mom and Samantha. But they all manage to be adults about the whole thing. Kristy’s nervous/scared about change in general, but is mostly just about whether the BSC will stay intact and how much it will impact her life if it doesn’t. It’s clear that all the other girls don’t feel as strongly as Kristy about wanting to keep the club going.

The kids in the neighborhood are putting together a time capsule about the neighborhood, and the BSC. The plan’s to open it in 7 years, because that’s when their oldest clients (the triplets) will be graduating high school.

Letters that Jessi, Mal, Abby, and Dawn wrote are put in the capsule, along with the items, where they talk about what Stoneybrook means to them. Jessi put in a newspaper article about racial intolerance a few towns over, Mal puts in a pamphlet for the Stoneybrook Chamber of Commerce, Abby puts in pictures of the BSC, and Dawn puts in ads from the Stoneybrook town paper (to show how airline (and other) prices changed). The current BSC members wrote letters as well for the capsule. Mary Anne puts in a piece of burnt wood from the fire, Stacey puts in the flier for the BSC talent show they did awhile back, Kristy puts in the original flier for the BSC, and Claudia puts in a flier about the upcoming celebration for Stoneybrook’s 250th anniversary.

Jackie Rodowsky puts in a softball and a note about how important Kristy is to him and the Krushers. Claire puts in her teddy bear, because she doesn’t understand what a time capsule is. Then the day after they bury it she freaks out and they have to dig it up to get it back to her (but they rebury the capsule right away). Charlotte Johansson puts in the Stoneybrook Elementary School newspaper, featuring an award-winning essay she wrote about Stacey (the most important person in her life).

Meanwhile, the girls are also writing letters to themselves, meant to be opened in 4 years. It’s this school tradition where they hand in these letters at 8th grade graduation and are have them mailed back to them at high school graduation. They are handed in sealed, so no one else will read them. This is really hard for everyone to do, but ultimately they all write nice letters summarizing the big things that have happened to them and predicting the future.

It’s hard to believe, but it’s been almost fifteen years since Kristy, Claudia, Mary Anne, and Stacey formed the Baby-sitters Club. When I first began working on the series, I thought I was going to write four books, one about each of the girls. But to my surprise, a total of 213 books about Kristy and her friends followed. I’ve had a lot of fun working on the series; in fact, these have been fifteen fabulous years. But now it’s time to say good-bye to the members of the BSC.

The series wouldn’t have lasted so long without the support of many people, but especially without you — the loyal BSC readers. Over the years, I’ve felt a great connection to my readers. I’ve received thousands of amazing letters — letters with suggestions for plots, letters of thanks, and letters from kids who simply wanted to share their lives with me. I’ve met readers at book signings, at schools, and through contests. Of all the wonderful things that happened to me as a result of the Baby-sitters Club, getting to know my readers was one of the best.

I’ve been thinking a lot about decisions and choices lately. Often, making the right decision is easy. But sometimes a decision is difficult to make, even when you feel certain it’s the right one. That’s how I feel about the decision to end the series. I will miss working on the books, miss spending time with the characters, and especially miss my connection with the BSC fans. On the other hand, I have fifteen years of memories, many of them created by you. That’s why this last book is dedicated to my readers.

Thank you for your loyalty and enthusiasm.

The Baby-sitters Club was conceived over fifteen years ago, and would not have become a success without dozens and dozens of people who brought their time, energy, vision, and talents to it. To them, I am unendingly grateful. They may never know how much I appreciate them. I want to extend thanks to:

The Baby-sitters Club has many other Scholastic friends as well. Among them are Dick Robinson, Barbara Marcus, Ed Monagle, Craig Walker, Judy Newman, Maggie Kniep, Alan Cogen, Betsy Howie, and all those (currently and formerly) in the publicity department, the sales department, the marketing department, the book clubs, and the book fairs who have promoted the series.

As always, I want to thank Laura Godwin.

And most of all, I want to thank Jean Feiwel, who came up with the idea for the Baby-sitters Club and who guided it from the very beginning to the very end. Without her, the series wouldn’t have happened at all. Thank you, Jean.

Since this book concluded both the Friends Forever series and the Baby-sitters Club franchise, it included a timeline of BSC-related events starting when the series was conceived in 1985, and ending with Graduation Day in 2000. While the published book included this timeline, the eBook did not.

These appeared at the end of the published book. 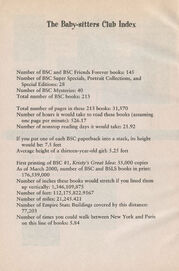