Haley Braddock is a 9-year-old sitting charge of the Baby-Sitters Club. She is the older sister of Matt Braddock and a member of the Braddock Family.

She has short blonde hair with bangs and a tail in the back, a heart-shaped face with brown eyes, dark lashes, and a dimple in the right corner of her mouth. She is also small for her age. She wears a clay pendant, painted red with an "H" scratched on it that Matt made for her in art class and gave it to her for Christmas.

Haley has a 7-year-old brother named Matt Braddock who is profoundly deaf. She is fluent in American Sign Language and uses it to communicate with Matt & often translates for him when they are with people who don't understand sign language as well. Haley can be very protective of Matt, but she sometimes feels resentful of the attention that he gets. When she first moves to Stoneybrook she felt as if she had to stand up for him when kids tease him in Jessi's Secret Language. Later when he starts making friends, she does too.

She and Matt participated in the BSC pet show and they win the "Best Pet Handlers" prize. Haley dressed as a gypsy fortune teller named Madame Leveaux as a part of the Stoneybrook Elementary School fundraiser for the Zuni reservation; she wins a telescope for the most creative fundraising idea. She dresses up as Madame Leveaux again for Vanessa's haunted house.

Haley attended the Valentine's Day Masquerade and entered the "funny-face race" at the BSC Mini-Olympics.

In Claudia and the Little Liar, Haley gives the BSC members a hard time when it comes to homework, but it is later revealed that Haley is struggling in school. She plays basketball with her friends as part of the Girls Stoneybrook Basketball Association.

She leads a group of kids to put together a project to explain why the BSC are the best baby-sitters in The Fire at Mary Anne's House.

She was in Jessi's group when the BSC took their clients to Sudsy's Carnival in Kristy and the Mother's Day Surprise.

In Baby-sitters' Island Adventure Haley was caught in the storm storm washed them to shore of a deserted island. Along with Jamie Newton, Jeff Schafer, and Becca Ramsey they stayed on the island for a couple of days and sat by Claudia Kishi and Dawn Schafer. She had developed sunburn on the island and happily returned. 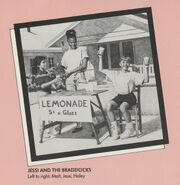 #128 Claudia and the Little Liar

#24 Kristy and the Mother's Day Surprise

Haley with the Pike Triplets
Community content is available under CC-BY-SA unless otherwise noted.
Advertisement