Start a Wiki
Hank Reubens is a student in Ms. Colman's class at Stoneybrook Academy.

He lives in downtown Stoneybrook and near a busy street in Karen's Wedding. Hank hosted a car wash for two dollars to earn money to buy Ms. Colman a gift for her wedding. The entire class got together at his house to help out.

In Spelling Bee he competed against the other students in several spelling bees in several tournaments. He finally won the class tournament and went on to compete against Debbie Dvorak in Mr. Berger's class. Hank purposely threw the last round after he learned that his classmates were betting on him. He and Debbie had decided to compete again where he really won.

In Karen's Gift he did not have anyone to bring to school for their mother's day party. His dad ended up coming to the class to celebrate with him.

His parents are divorced and he lives with his father full time. He visits his mother in Florida where she now lives with the rest of her family. His twin younger sisters also go to Stoneybrook Academy and are five years old in kindergarten.

The Kids in Ms. Colman's Class #11 Spelling Bee
Add a photo to this gallery

Nancy Dawes and Hannie Papadakis whispering. Hank is in their group, second from right. 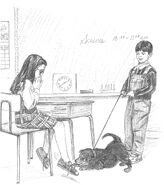