Hannah "Hannie" Papadakis is a seven-year-old girl in Ms. Colman's second grade class at Stoneybrook Academy who is one of Karen Brewer's best friends. She lives on McLelland Road across the street from the "big house" where the Brewer/Thomas Family live. She is a member of the Papadakis Family. Hannie narrated chapters in the Baby-Sitters Little Sister Super Special books.

Hannie has dark hair, deep brown eyes, olive skin, and a terrific smile. She's described as stocky in Mallory and the Trouble with Twins. When she smiles the corners of her eyes crinkle like her mothers in Kristy and the Snobs.

She considers herself a patient person in Halloween Parade.

In Karen's Book, Hannie and Karen met at Little Friends Day School. Karen remarks that Hannie had just moved to their neighborhood. They became friends quickly and Hannie cried when Karen moved away when her parents divorced. They have been friends ever since.

Hannie and her brother Linny attended Dawn's "Save the Planet" class; she and Melody Korman work at the plant booth at the Green Fair.

In her wedding, Karen was her bridesmaid when she had a fake wedding to Scott Hsu. Hannie had a crush on him in Karen's Birthday and tried to make him like him. She had lost a tooth just before her wedding making her feel ugly. In Karen's Mistake she has a crush on a singer named Nate Bellows and listens to his music all the time and then another singer by the end.

In Karen's Reindeer she got to play Rudolph in the class Christmas musical. She was afraid of heights when she was put into the harness to fly on the stage. Eventually she gave up the role to Karen when she felt sick about flying around on stage.

Hannie is a very helpful big sister to her younger sister Sari although sometimes she does not really like her. She loves her parents very much and gets along okay with Linny. Linny has taught her a few things according to her in Karen's Unicorn.

In Karen's Swim Meet, she spends time with her family when they rented a cabin in the mountains together.

In Karen's Pony Camp she made friends with the other girls very easily. Hannie is also very good at riding horses. She had become an intermediate rider and able to perform tricks on her pony.

In Karen's Lemonade Stand Hannie started to sell friendship bracelets next to Karen's lemonade stand before and after Krushers games. She eventually temporarily quit the team so she could make some extra money. Hannie finally joined in on the game against the Bashers after she missed playing.

In Karen's Angel every kid in the neighborhood puts on a Christmas pageant and they host it in her house. In the book they put on the nativity scene. She gets the part of the angel but wanted to be Mary. When Karen is assigned Mary they switch parts near the end of the book.

She sings Sunrise, Sunset for the Pikes talent show in Stacey vs. the BSC.

In Karen's Movie, she plays as a character in the movie Karen Brewer was making for her grandad. She, along with the others, quit the movie when Karen becomes too bossy. They make up in the end and enjoy their movie premier.

Hannie develops a crush on singer, Nate Bellows, in Karen's Mistake. She watched his concert on tv instead of having a fun at the New Years party. She wrote letters to him and thinks that they will get married. This leads to her having a fight with Karen and Nancy Dawes. The three make up when Nate ignores her at a concert.

In the Graphic Novels[]

Hannie auditions for a part in Alice in Wonderland

Karen Brewer yells 'Boo!' at Hannie while she is reading a halloween book

Hannie takes the vision test next to the eye doctor

Hannie points out halloween on the calendar while Chris Lamar, Audrey Green, Sara Ford and Karen thank her for the costumes 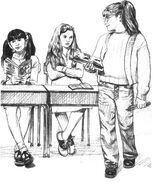 Hannie's father tells her he does not have free costumes for her and can't get them easily.

Omar Harris, Chris, Hank, Hannie mock Ricky Torres after he gets glasses, echoing how Ricky mocked Karen when she got glasses earlier.

Kids, including Hank and Chris, express their disappointment in Hannie for not having costumes, while Karen and Nancy defend her. 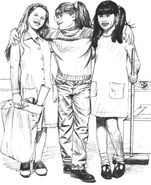 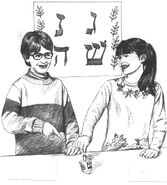 Nancy discussing what she, Nancy Dawes, Karen Brewer, and Ricky Torres are going for Halloween while making class decorations in Karen's Ghost.