The Baby-Sitters Club Wiki
Register
Don't have an account?
Sign In
Advertisement
in: BSC charges, Kids, Males,
and 3 more

Jackie Rodowsky is seven-years-old and one of the BSC charges. He is the younger brother of Shea Rodowsky and the older brother of Archie Rodowsky. Jackie is a member of the Rodowsky Family. He is accident prone and nicknamed "The Walking Disaster,” by the BSC.

Jackie is described as having red hair and a freckled face. Jackie has a big contagious grin with one tooth missing. He loses a tooth play softball. He is said to look like Alfred E. Neuman.

Shea and his brothers with Marilyn and Carolyn Arnold, Matt and Haley Braddock send complimentary anonymous notes to the BSC. They treat them to lunch, Jackie and Archie even draw them portraits of them for being their favorite baby-sitters in Claudia's Freind Friend.

He is the only kid on the Krushers who doesn't look neat. Jackie is a pretty solid softball hitter. He plays on the Krashers with as shortstop or second base.

Jessi helps him make a working volcano for the science fair, but she does most of the work, and he fumble his lines in front of the judges. Jackie did like blowing up the volcano though in Jessi's Baby-sitter.

Plays kazoo in All the Children of the World. He is the one that thinks of the name for the band. He acts as emcee for the performance.

He tried to paint inside of Bo's doghouse while Claudia is sitting and Shea paints half of the outside.

Nicky and Jackie were acting odd in Stacey's Secret Friend. He had borrowed his mother's cell phone one day. A couple of guys he knows thought he stole a jacket from one of them. Jackie told them that he had one just like, but they didn't believe it was really his and said that they would beat him up. Nicky Pike acted as his bodyguard until the situation was resolved.

In Kristy's Worst Idea Jackie tries to ride his bike to Kristy's house when he gets in a bike accident. He was going up the hill when a car was coming and swerved to get out of the way running into a tree. He not wearing a helmet. He was unconscious and taken to the hospital where fluid is drain from under his skull. He wanted to see Kristy after thinking that he was reason the BSC disbanded. He admits that he does some dumb stuff to be funny, but the club tells him that they love him anyway.

He was in Mallory's group when the BSC took their clients to Sudsy's Carnival in Kristy and the Mother's Day Surprise.

In the graphic novels, he has dark brown hair and no freckles.

Jackie is played by actor Danny Tamberelli for nine episodes.

He is played by Asher Metchik.

#20 Kristy and the Walking Disaster 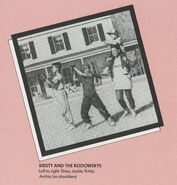