Janine Kishi is Claudia Kishi's older sister and a member of the Kishi Family. Her parents are John and Rioko Kishi, and her grandmother was Mimi Yamamoto. She is fifteen years old and is a student at Stoneybrook High School (SHS). Janine made her first appearance in Book #1 Kristy's Great Idea.

Janine has short black hair and glasses. She is a second-generation Japanese-American. Janine favors plain, modest clothing and has a serious demeanor. In Claudia's Big Party, Claudia says that she has her ears pierced and usually favors tiny gold balls and pearl studs. In Claudia and the Great Search, it's mentioned that Janine looks like her father. In The Mystery at Claudia's House, her hair is straight and cut in a dutch-boy style and her glasses are wire rimmed - she never considered getting contacts.

It's mentioned in Claudia and the Genius of Elm Street that when she's upset she gets snappy.

Janine sticks to herself, has almost no friends, uses big words, and according to Claudia, all she cares about is her computer. In Kristy's Great Idea Janine says that the Baby-Sitters Club is an outstanding idea. She wants to make sure the club's name is spelled correctly.

She's worried about the BSC in The Truth About Stacey, immediately telling her sister about a possible threat, the Baby-sitters Agency.

Dawn mentions in Dawn and the Impossible Three that, unlike her BSC friends, she doesn't mind Janine and finds her all right.

In Claudia and the Middle School Mystery Janine believes that Claudia didn't cheat on her test. She helps arrange a make up test.

In Claudia's Big Party Janine is in charge of Claudia while their parents are away for the weekend. She looked forward to cooking, watching a video, and maybe shopping while they are gone. She had made a whole list while Claudia was on a date of what they would do together. She also approved of Claudia having her friends over before Claudia could ask for her parents. By the end of the book, Claudia helped her reconnect to some of her old friends.

In Baby-sitters' European Vacation, Janine takes a job as a counselor at the Stoneybrook Elementary School Playground Camp. She uses the position as a way to make her more well-rounded.

She loaned out an instamatic camera to the BSC in Claudia and the Clue in the Photograph so they could make a photo album to send to Dawn Schafer.

Janine is exceptionally smart, with an IQ of 196. She takes classes at Stoneybrook University and is always correcting Claudia. She taught herself to read before she went to kindergarten and is great at helping Claudia study. She never misses the bus, her homework is always done on time. Signs up for numbers crunchers job as part of the summer work/study program. She works with Professor Woodley. She takes French at school as well.

Claudia mentions that she was learning computer programming, physics, and astronomy in Claudia and Mean Janine.

In Claudia and the Great Search, it's mentioned that she has been going to Stoneybrook University for two years already. As a junior, she won an award for being the most accomplished student at the community college at the high school. The last time the award went to a senior ten years ago. She got a plaque and 250 dollars. The Stoneybrook News covered the award ceremony.

She was getting a certificate from the Stoneybrook Chamber of Commerce in Kristy's Worst Idea.

In Claudia and the Great Search it's mentioned that she had taken advanced math and science courses in eighth grade. She won first prize at the state science fair as well.

In Claudia and the Clue in the Photograph she takes a work study program during the summer, it involved helping one of her teachers with research.

She has a boyfriend named Jerry Michaels, a high school student who's in advanced placement classes at the college with her. He likes her as she is, not with any of the new looks she tried in The Mystery at Claudia's House. Jerry practically has to beg her to take time off for picnics and hikes. He likes to send her notes in the mail. They were having fights and Jerry forgetting dates in Claudia and the Lighthouse Ghost. They break up before the events of Claudia's Big Party.

In Claudia and the Lighthouse Ghost, she develops a crush on Steve Hatt. He introduced her to a bunch of popular people. Janine notes that he's very sweet.

In the Netflix show, she is revealed to be dating Ashley Wyeth.

Janine has pictures of Albert Einstein, Madame Curie, Richard Feynman, Grace Hopper, Nikola Tesla, and Rosalind Franklin on her walls. Claudia remarks that everything is neat, plain, and everything has a place in Claudia and the Lighthouse Ghost. Janine has a computer in her room. Her room is precise - her shoes are in a line and her clothes are in order by color and item. She cleans her room every Saturday morning.

Like Claudia, Janine hides junk food in her bedroom, as revealed in Book #2, Claudia and the Phantom Phone Calls.

In the Graphic Novel[]

Janine appears in the graphic novels as well. She mainly appears in Claudia and Mean Janine. She appears the same as her original counterpart.

She is played by actress Jane Chen. Janine was only in one episode, Claudia and the Mystery of the Secret Passage. She is shown liking to cook like her book counterpart.

She is played by Aya Furukawa. She is in three episodes of the Netflix series. Janine can speak fluent Japanese. As a modern update, Janine now has a robotic door, as seen in Kristy's Great Idea. In Season 2, she is revealed to be a lesbian, and she is currently dating Ashley Wyeth. Ashley strongly supports Janine and they are often shown briefly at the Kishis' house before going off to study in Janine’s room.

Book #49 Claudia and the Genius of Elm Street. 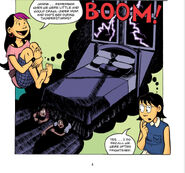 Janine and Claudia thinks of their childhood during thunderstorms. 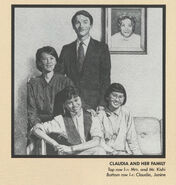 The Kishi family portrait from the 1991 BSC calendar.

Janine with a newborn Claudia.

Close up of Janine

Janine, BSC members, and family members at the dinner table 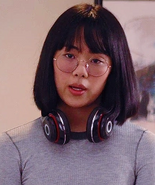 Close up of Janine