Jordan Pike is a member of the Pike Family. His parents are John and Dee Pike. He is one of the Pike triplets, along with Adam Pike and Byron Pike. Jordan also has a younger brother, Nicky Pike, and sisters Margo Pike, Mallory Pike, Claire Pike, and Vanessa Pike. He lives with his family in Stoneybrook, Connecticut, where he was born.

Like all the other Pikes, he has blue eyes and reddish-brown hair. Jordan is forty seconds older then Adam and about three minutes older then Byron in Claudia and the Lighthouse Ghost.

In Claudia and the Middle School Mystery it's mentioned that he can be wild.

It's mentioned throughout the series that he plays piano. In Dawn and the Impossible Three he is the only one to see Buddy Barrett before he disappears, because he had just gotten out of piano lessons. His lessons are at 11:30.

In Mallory Hates Boys (and Gym) he switches places with Johnny, James and Mathew Hobart. While he was at the Hobart house he impresses Mr. and Mrs. Hobart by playing the piano. When Mallory made the archery team, he teams up with his brothers and makes her a cake that said "Mallory Congradulations" on it.

He admires Spuds Diamond coach on the Olympics and acts like him in Jessi's Gold Medal. He tries to take control of training his family for the BSC mini olympics.

In Kristy and the Sister War, he volunteers to be on the decorations committee for the all kids dance.

In Mary Anne + 2 Many Babies, he was persuaded to pair up with Margo to "parent" an egg.

Jordan invented the game "Secret Agents" and proclaims himself the head spy in Good-bye Stacey, Good-bye.

Jordan and Adam share Vanessa and Mallory's old room after the events of The All-New Mallory Pike after arguing over the room arrangements.

He is played by actor Rémi-Gaël Panon in this version. This is the first time that he is portrayed on screen. He is only in the episode Boy Crazy Stacey (Web Series Episode). 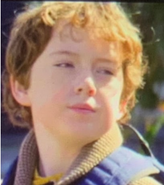 Where he likely got his name Baby-sitters' European Vacation