Karen Brewer lives next door to Mrs. Porter, who wears long robes and has wild gray hair. Mrs. Porter has a black cat named Midnight and always seems to be working in her garden. Karen isn't supposed to spy on her neighbor, but she's determined to prove that Mrs. Porter is a witch named Morbidda Destiny!

Mrs. Porter is getting ready to have a special meeting at her house, and Karen is sure the meeting is for witches. Are they going to cast a spell on Karen? Or will she be brave enough to send them away -- once and for all?

Karen Brewer a girl with a wild imagination has two families and two of everything but when she goes to her bigger family she is faced with the "witch" next door who is also known as Mrs. Porter. One of Karen's rules is to not spy on Mrs. Porter but she breaks the rule all the time. One night she saw Mrs. Porter and Midnight fly away on her broomstick! She tries to figure out if it was just a dream. One day when Karen is spying on Mrs. Porter she finds out that Mrs. Porter is throwing a "witch gathering". With her best friend Hannie, Karen decides that she wants to save the whole neighborhood from the witches and warlocks by holding on to herbs and their hands tightly as they begin to say a spell to stop the witches and warlocks. But as doing so turns out that the "witch gathering" was just a gardening club meeting. Karen gets into big trouble by her parents and her grandmother and has to write an apology for ruining Mrs. Porter's gardening club meeting but Karen still believes that her next-door neighbor is a witch. A clever one. 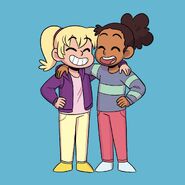 Karen and Hannie in the graphic novel
Add a photo to this gallery
Retrieved from "https://babysittersclub.fandom.com/wiki/Karen%27s_Witch_(Graphic_Novel)?oldid=35016"
Community content is available under CC-BY-SA unless otherwise noted.