Kristy's father left her family when she was little. Now, years later, he's called with some surprising news: He's getting married! Kristy and her brothers Sam and Charlie must head to California for the wedding — and to meet their new stepmom. Kristy doesn't know what to expect. It's been a long time since she's seen her father. And now she's supposed to be his bridesmaid!

What will Kristy do?

Kristy is unsure about what to think. Her father Patrick Thomas is getting married, and asks Charlie, Sam and Kristy (not David Michael, who Kristy feels like Patrick has forgotten about) to fly to California and be his best men/bridesmaid. Charlie was moody and Sam acted like he and Patrick are old buddies. Kristy comes home knowing that the wedding will be one that will stand out to her for a long time. 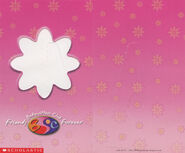 Retrieved from "https://babysittersclub.fandom.com/wiki/Kristy%27s_Big_News?oldid=26522"
Community content is available under CC-BY-SA unless otherwise noted.