Four friends and baby-sitting — what could be more fun?

The first book in the series is narrated by Kristy Thomas, the club's president. It introduces Kristy's family, best friends, school, and her current baby sitting charges like Jamie Newton, Karen Brewer, Andrew Brewer, The Feldmans, and David Michael Thomas.

Kristy thinks the Baby-sitters Club is a great idea. She and her friends Claudia, Stacey, and Mary Anne all love taking care of kids. A club will give them the chance to have lots of fun — and make tons of money.

But nobody counted on prank calls, uncontrollable two-year-olds, wild pets, and parents who don't always tell the truth. And then there's Stacey, who's acting more and more mysterious. Having a baby-sitters club isn't easy, but Kristy and her friends aren't giving up until they get it right!

Kristy has a great idea: to form a club that baby-sits! Kristy and her friends, Claudia and Mary Anne, already baby sit and they consider getting new-girl-in-town-and-school Stacey McGill to join, too. Once everything is decided and the club is formed, Kristy and her friends have wacky baby sitting adventures (like DOG sitting) that they never counted on. Will they give up the club or will they keep trying?

Kristy's divorced mother, Elizabeth Thomas-Brewer, has been dating a new guy, Watson Brewer, and Kristy is feeling cautious about him. He seems like a good guy, but Kristy's real father, Patrick Thomas, walked out on the family, leaving Elizabeth to look after four kids on her own, including a newborn baby (David Michael). Kristy doesn't want to get hurt again and has to decide whether to hate his guts or to open up to him, taking the chance that he'll hurt her, just like her father did to her, emotionally. Kristy must decide whether it's worth the pain to love a new (almost) father again.

Also, Stacey, their new friend, is acting mysterious and Kristy, Mary Anne, and Claudia have to find out what she's up to.

Now that you’ve read Kristy’s Great Idea, I thought you might like to know a little bit about how this story and the Baby-sitters Club came to be.

In 1985, I had just left my job and started to write books for kids full-time. That was when my editor suggested that I write a four-book miniseries entitled “The Baby-sitters Club.” I had to figure out what a baby-sitters club might be, and decided on a business run by a group of friends. Then I created Kristy, Claudia, Stacey, and Mary Anne. I wanted to create a group of kids who are very different from one another but work well together. I based Kristy on my best friend from when I was growing up, and Mary Anne on me. Kristy was the outgoing one with all the big ideas, and Mary Anne was the quiet one. She and Kristy were best friends even though they were opposites. Eventually Claudia and Stacey would become best friends, too.

Baby-sitting was easy for me to write about because I did so much of it when I was growing up. (In fact, right through college.) So I thought I would enjoy writing about it, too. And I do!

The different covers of this book. 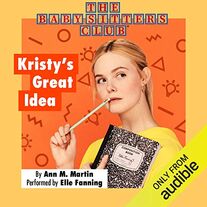 French back cover by Karim Friha 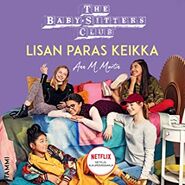