Baby-sitters Club merchandise was produced by many companies primarily during the 1990s.

Four puzzles were made by Milton Bradley.

Four computer games were released on CD from 1996-1998. In addition, there was a BSC conference on Prodigy in starting in 1993.

Songs for my Best Friends was released on CD and cassette tape by Hook Monster Records in 1992.

In 1995, the Baby-sitters Club Movie was released. It later came out on VHS and DVD. A variety of merchandise was made to promote it. 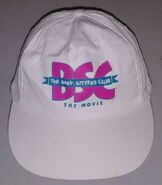 Six Baby-sitters Club Audio Books on Cassette Tape were released with packaging that included a charm for the baby-sitter narrating the book from 1994-1995.

Nine short stories about the Baby-sitters Club were produced as extras that came with either the mystery board game, the 1993 Kenner dolls, or the 1991 Remco dolls.

Five wall calendars were produced from 1990 - 1994, featuring original art from illustrator Hodges Soileau not found on book covers, featured black-and-white art by Angelo Tillery, 2 pages of stickers, and a wipe-off memo board. Three student planners were released between 1990 and 1993.

1993 sheet music for the song "Say Hello to Your Friends" 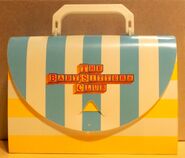