Lucille Jane "Lucy" Newton is the infant sister of Jamie Newton and member of the Newton Family. She is affectionately called Lucy-Goose. She was born in The Truth About Stacey. Lucy and her family live on Bradford Court near Claudia Kishi.

Lucy turns seven-months-old in July. She has dark hair and big, round, deep blue eyes. She has four teeth and just grew two more. Lucy often smiles and almost always wakes up happy according to Claudia in Kristy and the Mother's Day Surprise.

Lucy was christened by a minister in Claudia and Mean Janine. She gets entered in a baby parade on the BSC's float in Kristy and the Baby Parade. She recently had the chicken pox. She attended the Spring Dance at the Stoneybrook Community Center with Jamie and her mother. At first, Jamie was jealous of his new baby sister, but later adores her in Claudia and Mean Janine.

She is played by Randi Rosenholtz.

She is played by Stella Rahou and Sophia Rahou in one episode. 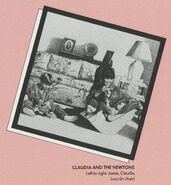 Claudia baby-sitting Lucy and Jamie Newton, from the 1992 BSC calendar.
Community content is available under CC-BY-SA unless otherwise noted.
Advertisement