Mallory and the Mystery Diary

Mallory and the Mystery Diary

A locked trunk and a secret diary all add up to... a mystery for the Baby-sitters!

Mallory and Claudia are helping Stacey unpack from her move back to Stoneybrook when they find an antique trunk in the McGills' attic. Stacey doesn't want the dusty thing, so she gives the trunk to Mallory...who finds an old diary in the bottom of it.

The diary once belonged to Sophie, a girl who lived in Stacey's house in the 1890s. As Mallory reads deep into Sophie's diary, she discovers a mystery. There may be ghosts that haunt Stacey's house!

The Baby-sitters have one big mystery on their hands to solve. Because Stacey's house isn't big enough for her, her mom...and a family of ghosts!

Mrs. Pike asks Mallory to take a tuna casserole over to Stacey’s house as a welcome-back present for Stacey and Mrs. McGill after returning from New York to Stoneybrook.

While at Stacey’s house, Mallory, Stacey and Claudia find an ancient trunk that is rich-coloured, made from leather, and has brass fastenings. However Stacey doesn't want it in her attic since it is taking up too much space and Mrs. McGill suggests throwing it away until Mallory offers to keep it. Mallory then pays Bryon, Adam, and Jordan (the ten year old Pike triplets who are Mal’s brothers) $1 each to get the trunk to Mal’s bedroom.

The next day, Mal’s brothers ask if they can open the trunk, but Mallory won't allow them because she doesn't want to ruin the locks. Later that day at the Monday BSC meeting, Mallory informs the club on the trunk's progress, and Kristy suggests using dynamite to open the trunk. Finally on Friday afternoon, Mallory orders her triplet siblings to open the trunk with a hammer and wrench, and what she finds inside is amazing. Not only are there antique dresses, blouses, brooches, and books, but also the diary of Sophie, a twelve-year-old girl that lived in Stacey’s house during the year of 1894.

When Mallory begins to read deep into Sophie’s diary she discovers a mystery that haunts Stacey’s house. Sophie’s mom died two days after giving birth to Sophie‘s brother Edgar, and three days after her mom was buried, a portrait of her disappeared from Sophie’s grandfather‘s house. Sophie’s grandfather is also known as Grandfather Hickman or Old Hickory who was the meanest, richest person in Stoneybrook and is rumored to haunt the Stoneybrook Cemetery. Grandfather Hickman accused Jared (Sophie’s dad) of stealing the painting and everyone believed him since Jared is known for his shady past and being arrested twice. As a result of this, Hickory wrote Sophie, Edgar, and Jared out of his will and stopped lending them money.

I vow clear my fathers name. If I cannot do that, then I am certain that when he and I do eventually die, our spirits will remain in the house, uneasy, unable to rest. My only hope is that little Edgar shall grow up untainted.

In the next meeting of the Baby-sitters Club Mallory asks Stacey if she has seen anything weird. She denies this but does say that she once saw something white in her room at the foot of her bed but isn’t sure if it is just moonlight.

On a Friday meeting of the Baby-sitters Club Mallory decides to hold a séance in order to contact the spirit of Sophie speaking through Kristy in a wavery, eerie voice. Kristy says at the end of the séance though, that she can‘t get Sophie to speak through her and only a crazy goon would think that to Mallory.

The century-old mystery is finally solved when Mallory shows Buddy the trunk, and Buddy’s hand gets caught in the pocket of it and he then finds papers of Old Hickory’s confession. They find out that after his daughter died he was distraught and couldn’t bear to look at her portrait but didn’t want to get rid of it so he hired an itinerant painter to paint ships over the painting. After that Hickory’s friends wanted to know where the portrait was so since Hickory was embarrassed about what he had done he lied and said the painting had disappeared and had probably been stolen. Immediately the townspeople suspected Jared.

After Stacey‘s mom got the painting from the art restorer the McGill’s decided to hang the painting in the living room by the mantlepiece since they wanted to reunite the portrait of Sophie’s mother, with the spirits of Sophie and Jared.

But no one knows if the house is still haunted………

Buddy Barrett‘s teacher Mr. Moser, sent home a note saying that his reading level was below grade level, which makes Mrs. Barrett upset at herself for not having enough time to run the household, go to work, and spend quality time teaching her kids. Later Mallory gets a steady job tutoring Buddy and Buddy’s reading level moves from the Crows (lowest reading group) to the Robins (average-middle reading group.)

-Meanwhile, at the Thomas-Brewer household, Kristy dares her brother David Michael, stepsister Karen, stepbrother Andrew, and adopted sister Emily Michelle to look into the attic on the fourth floor which Karen is convinced is haunted. While in the attic, they play hide-and-seek and don’t discover anything out of the ordinary but Karen claims that it was because it wasn’t night.

I have never been a diary or journal keeper, but when I was young—in fact, starting on the day I was born—my mother kept a diary for me. I love looking back through the diary to find out all sorts of things—what my first day of school was like, when I (finally) learned how to ride a two-wheeler, or simply what I did on June 10, 1958. I’m so glad my mother kept a diary for me, but I wish I had kept one for myself, too.

A journal isn’t necessarily exciting or thrilling, but it’s interesting because it’s about you. It’s also a great source of story ideas. Lots of kids tell me that they love to write, but they don’t know what to write about. I tell them that the best things to write about are things that have actually happened. And what better place to keep track of things that have happened to you than in your very own journal? Remember, it’s the story of your life. And only you can tell it. 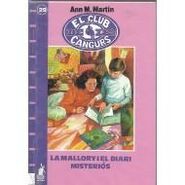 French cover by Émile Bravo for The Ghost at Dawn's House, Mary Anne's Bad-Luck Mystery, and Mallory and the Mystery Diary

French back cover by Émile Bravo for The Ghost at Dawn's House, Mary Anne's Bad-Luck Mystery, and Mallory and the Mystery Diary
Community content is available under CC-BY-SA unless otherwise noted.
Advertisement