Margo Pike is Mallory Pike's 7 year old sister, the second youngest in the Pike Family. She has 7 brothers and sisters and lives with her family in Stoneybrook, Connecticut, where she was born.

Like all the other Pikes she has blue eyes and brown-red hair color. She likes to wear her hair in pigtails in Claudia and the Mystery at the Museum.

She, Nicky, and Vanessa play a prank on Karen Brewer in Karen's Mermaid by pretending to be mermaids. They convince her that a mermaid had been writing to her and to give them small items until Karen asked for mermaid chow at the grocery store. They all laughed at her but made up in the end.

As revealed in Boy-Crazy Stacey, Margo and her family go to Sea City, New Jersey for vacation every year. Margo barfs easily since she has motion sickness, particularly after long car or plane rides, such as in Super Special #1 Baby-sitters on Board!. She needs the barf bucket on the family trips. She throws up on the merry-go-round at Sudsy's in Kristy and the Mother's Day Surprise. At Trampoline Land in Sea City, she almost gets sick.

Margo entered the Little Miss Stoneybrook Pageant. While she can't carry a tune, her talent was to peel a banana with her feet and then recite "The House That Jack Built."

She shoplifted a small ring and two packs of gum from Pembroke's Party Store in Jessi and the Bad Baby-sitter. She later confesses her deed to her mother and pays back the store.

Sometime prior to chapter 9 in Kristy in Charge in school that day, she was scolded for blowing straw wrappers in the lunchroom.

Her best friend is her sister Claire Pike.

She had a crush on David Michael in Karen's Secret Valentine.

Margo moves into the triplets and Nicky's old room when Mallory leaves for boarding school in The All-New Mallory Pike. She now rooms with Vanessa, Mallory, and Claire. She used to share a room with just Claire.

In Jessi and the Bad Baby-sitter Margo had been stealing from Pembroke's Party Store. She was caught by Jessi and promised that she would tell her mother. When she didn't Mallory and Jessi confronted her and helped her tell their mother. Mrs. Pike drove her down to the store to return the items and apologize to the manager. Margo had stolen some gum, a ring, and a rubber dinosaur. She played as Sneezy in the Snow White video for Dawn Schafer.

She bought "moon dust" in the mail only to discover that she didn't want it. Later she ends up selling the things she bought in Stacey's Choice.

She was in Mary Anne's group when the BSC took their clients to Sudsy's Carnival in Kristy and the Mother's Day Surprise.

Margo entered the science fair in Jessi's Baby-sitter. She got extra credit for participating.

In Poor Mallory!, she and her sister form CM where they sold lemonade and brownies to help the family out. They made 11.60 total even though not many people showed up.

In this series she is played by actress Evelyn Burke. This is the first time Margo is shown on screen. She is only in two episodes Boy Crazy Stacey (Web Series Episode) and Kristy's Big Day. 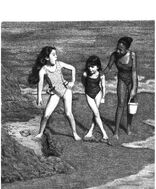 Jessi with Margo and Claire Pike looking for animals in tide pools, which Margo calls "beach zoos" at Sea City.

Margo's letter to Stacey in the BSC Chain Letter.

Evelyn Burke as Margo Pike in the Netflix series