Everyone loves the new Mary Anne — except the BSC.

Scholastic
Mary Anne's Makeover is the 60th book in The Baby-Sitters Club series. Mary Anne Spier gets a whole new look. Everyone likes the new Mary Anne but does the BSC like it?

When Mary Anne sees a picture of a haircut that she really likes, the baby-sitters don't pay much attention to it. They like good old Mary Anne just the way she is. But Mary Anne really wants the haircut. So she goes ahead and gets it — along with some new clothes and a little makeup. Mary Anne can't wait for her friends to see her. What a mistake! The Baby-sitters can't even believe what she's done. That makes Mary Anne mad. Maybe she's the one to blame?

In Mary Anne’s Makeover, Mary Anne gets a whole new look. Every now and then I get my hair cut, too. However, my style of dress rarely changes. And if I had to choose a member of the Baby-sitters Club whose style is most like mine, it would be Kristy. I came up with Kristy’s “uniform” because it’s what I wear just about every day. I’m happiest when I’m in jeans or overalls, turtlenecks, and sneakers (which is what I’m wearing right now). I believe in being comfortable!

I decided to give Mary Anne a makeover because I wanted her to assert herself. Also, I felt that at least one BSC member should have short hair, since lots of people do, including me. However, what I didn’t realize was that when I changed Mary Anne’s hair, the girl who models as Mary Anne on the book covers would have to wear a wig from then on. Sorry, Mary Anne! 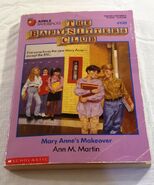 eBook cover
Add a photo to this gallery
Retrieved from "https://babysittersclub.fandom.com/wiki/Mary_Anne%27s_Makeover?oldid=32274"
Community content is available under CC-BY-SA unless otherwise noted.