Nothing beats your friends. But even so...

It was good for Mary Anne and Logan to break up for a while. Mary Anne has some time to herself, and she's been having lots of fun with her friends. But now Mary Anne can't help it. She misses Logan.

When she and Logan are both assigned to study their favorite author, Mary Anne thinks this is the perfect, most romantic way for them to get back together again. Until Cokie Mason, Mary Anne's mortal enemy, decides to steal Logan from her. Mary Anne vs. Cokie. Who will Logan choose?

Mary Anne and Logan get back together. Mary Anne, Logan, Pete Black, and Cokie Mason work together on an English assignment about author Megan Rinehart. On Author Day, when they all give speeches about Rinehart, all of them do well except Cokie. It becomes obvious that she copied her speech from a book jacket.

In Mary Anne Misses Logan, Mary Anne and Logan have been apart for some time. And while Mary Anne does miss Logan, she’s had plenty of time for herself and her friends. That was the good thing about breaking up with Logan. When I was Mary Anne’s age, my friendships were very important to me—and they’re still very important to me.

Here are some of the things my friends and I liked to do together: roller-skate, ice-skate, have sleepovers, go to the movies, put on plays, and, of course, baby-sit. Now, as an adult, my friends and I still enjoy some of these things, especially going to the movies. As a matter of fact, I still have the same best friend, Beth. We don’t see each other as often as we used to because we don’t live in the same town anymore. And instead of baby-sitting, we spend time with Beth’s daughters. Mary Anne learned something important while she was apart from Logan: Everyone needs time for their best friends. 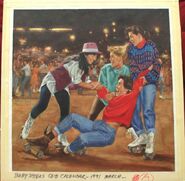 original oil painting of the cover by illustrator Hodges Soileau