Start a Wiki
Mary Anne Spier is the secretary of the Baby-Sitters Club, due to her exceptional organization skills and neat handwriting. She is thirteen years old and is in the eighth grade at Stoneybrook Middle School. Mary Anne made her first appearance in Book #1 Kristy's Great Idea. The last book in the original series, #131 The Fire at Mary Anne's House.

Mary Anne is five feet and and a half inch tall. She is petite, neat, and precise with brown eyes. She is the shortest to Kristy in the eighth grade. She used to wear her mousy brown hair wavy and in braids. She was finally allowed to let her hair down sometimes in Mary Anne Saves the Day. She gets her hair cut short by Joyce from the salon in the Washington Mall. She wears wire rimmed glasses for reading in Stacey's Ex-Best Friend.

Style: She does not have her ears pierced. She can now wear make-up (blush, eyeliner, lipstick), which her dad allowed her to buy during her makeover. She has some jewelry. Mary Anne dresses "sort of conservatively." She'll wear clip on earrings. She also has a bra now and takes more of an interest in clothes. Mary Anne never tans and must cover herself completely when at the beach to avoid burning. Her look is described as "neat preppy casual." She wears a Mary Anne necklace around her neck. Her dad says that he looks and behaves like her mother.

Mary Anne is quiet, shy, and not self-assured. She cries easily and often; Logan sometimes calls her the town crier. Whisper the words "Old Yeller" to her and her eyes well up. Perceptive and honest, she sees the best in people. She can be stubborn as she is shy. Mary Anne is well organized and has the neatest handwriting in the club. Although she is very shy, she can also come up with really good ideas.

She looks and acts younger then Claudia Kishi and Stacey McGill. She is the youngest of the five older club members. She is usually calm in emergencies. She can sound school teacherish and wants to be a teacher in Claudia and Mean Janine. In Graduation Day she wanted to study psychology. She tries to put others first, then learns how to balance others' needs with her own. She gets spooked if you say boo in broad daylight. She saves letters and other sentimental things in a cedar box her grandmother gave her. Mary Anne finds it hard to study with music playing. She doesn't get angry very often, but when she does, she's an expert with the silent treatment. The thought of dancing in front of people paralyzes her. Mary Anne wishes she was more outgoing.

In Stacey's Movie when she has a bad day she gives an emotional interview. Mary Anne says that people who can't be nice, people yell, and those that think they are better then others make her mad. She also doesn't like teachers that play favorites. She sometimes feels angry at her mother for dying.

Mary Anne was born on September 22nd in Stoneybrook, Connecticut around 10:00PM. Mary Anne has lived at Bradford Court since she was born. Her mother died shortly after her birth. She spent her first birthday with her maternal grandparents Bill and Verna Baker, after her mother died. She stays with them until she is eighteen months old. Mr. Spier and the Bakers have a custody fight, which is resolved without much fuss or bitterness.

Her father picked out her clothes for her (typically penny-loafers, jumpers, dresses, never pants or jeans; although in The Summer Before, Mary Anne wore patterned capris and pedal pushers).

She has never been far away from home until the events of Boy-Crazy Stacey. Her father used to only let her talk on the phone if it was about homework, and made her come straight home from school. She has an antique doll named Lila and a white teddy bear named Snowman.

In The Fire at Mary Anne's House, she mentions that she's been writing in journals ever since she could write. She normally writes when she feels like it.

She is responsible in the face of an emergency, as shown in Book #4 Mary Anne Saves the Day, when she was looking after Jenny Prezzioso, who had a temperature of 104 degrees and called 911.

Mary Anne was the first to have a real and steady boyfriend. Mary Anne and Logan Bruno had some fights (like in Book #41 Mary Anne vs. Logan), and they broke up for awhile but got back together.

In the Baby-sitters Club: Friends Forever series she broke up with Logan. In Mary Anne's Revenge she had nightmares about the fire. Mary Anne snuck out of the house to go to Cokie's party and told her off. Afterward she and her father talked about how they've been feeling since the fire. She was also on the yearbook committee.

Mary Anne's room was decorated in pink and white and looked like a nursery. It had pink-framed pictures of family, Alice in Wonderland, and Humpty Dumpty. Dawn Schafer and Kristy Thomas helped her redecorate her room; taking off the pictures and putting posters and photographs and stencils picture frames.

After the barn is remodeled her room was spacious and full of light. It has a blue and yellow color scheme. Her closet is huge and has an all new bedspread, curtains, rug, and desk.

Mary Anne volunteers at Stoneybrook Public Library in the children's department in Mary Anne and the Library Mystery.

In The Secret Life of Mary Anne Spier, Mary Anne gets a job at Washington Mall in the Christmas area to pay off a credit card bill. She plays an elf at the Winter Wonderland set up.

She badly sprains her ankle in a biking accident in Mary Anne and Camp BSC.

She can stay out until 9:30 on weeknights and 10:00 on weekends. She has never made a baby-sitting scheduling mistake.

Her scariest baby-sitting experience was when Jenny Prezzioso gets a fever of 104 and an ambulance takes her to the hospital. She volunteers for a month as aprt of Jessi's idea for the club to do community service. She helps with her parents' friends' son who has brain damage in Jessi's Wish. Becomes a BSC outcast after Logan is discovered baby-sitting with her at the Kuhns.

Mary Anne is the secretary of The Baby-Sitters Club. The secretary's job is to keep The Record Book up to date. The Record Book has every BSC members' schedules, and Mary Anne has to write down the job information when a call comes in, see who's available, and also has to have good organizational skills and neat handwriting. She also has to keep track of Jessi's dance classes, Claudia's art classes, Kristy's softball practices, Stacey's trips to New York, and more. A lot of the Baby-Sitters Club members say Mary Anne's job is the hardest.

Mary Anne is in eighth grade her school locker is 132 and her homeroom is room 216. It's about as far from her locker as you can get. Mr. Blake is Dawn and Mary Anne's homeroom teacher. Kristy is in her social studies class. Ms. Frost is her math teacher. Ms. Simon and Ms. Belcher are her English teachers, just in different semesters.

She takes sewing lesson on Saturday afternoons in exchange for doing chores for Mrs. Towne.

In Kristy and the Missing Child Mary Anne was in danger of failing home ec. In The Baby-Sitters Club Chain Letter she had trouble in English and panicked.

She goes with Logan to the Remember September Dance, Fifties Fling, Halloween Hop, Valentine Dance, January Jamboree, and both the school and community center spring dances.

Mary Anne and Kristy have been best friends since childhood and lived next door to one another until Kristy's mother remarried in Book #6 Kristy's Big Day and moved her family to her new husband Watson Brewer's mansion across town. Kristy is Mary Anne's best friend in the world and was her first best friend.

During a brief falling out with the rest of the club early in the series (in Mary Anne Saves the Day), Mary Anne befriends the new girl in school, Dawn Schafer, and the girls become close friends to the extent that Mary Anne also considers Dawn her other best friend. She had trouble making friends on her own, and since her family is friends with the Thomases and the Kishis, that was how she met Kristy and Claudia. Mary Anne finally learned how to make friends on her own when she met Dawn. Dawn and Mary Anne often walk together to BSC meetings (until Book #31 Dawn's Wicked Stepsister when they started biking there).

Kristy's mother has also been like a mother to Mary Anne.

She was also close with Claudia's grandmother Mimi until she passed away in Book #26 Claudia and the Sad Good-bye, and she grew up with Kristy and Claudia. She lived across the street from Claudia. As revealed in Mary Anne Saves The Day, she likes Mimi's accent. She thinks it's soft and nice to listen to. Mimi was helping Mary Anne knit a sweater for her father. She often kissed Mimi on the cheek.

In The Secret Life of Mary Anne Spier, she makes a new friend named Angela and invites her over for Christmas. They don't see each other ever again, however.

Logan Bruno is her first real boyfriend. She meets Logan during lunch the first month of eighth grade. She feels like she could be in love with Logan. Their first date is the Remember September Dance. Richard demanded Mary Anne and Logan meet at the party and dance instead of Logan coming to her house.

She feels like Logan is taking over her life in Mary Anne vs. Logan. He gives her a bracelet with tiny gold hearts linked together. Mary Anne gives it back to him and breaks up, wanting to be independent. She and Logan were just friends. They get back together in Mary Anne Misses Logan and he now gives her space. Logan loves her new make over she got.

Mary Anne exchanges rings with Alex at Sea City. She wears it on a chain around her neck. He was the first boy she was interested in, sees him again when sitting for the Pikes. He gives her a big purple hippo. She thinks she's in love with him but she's loyal to Logan. Alex has a girlfriend back home so they end vacation as "friends forever."

She goes out with a boy named Bob in Maynard, Iowa. He is the grandson of one of her grandmother's friends. He's very cute but they don't have anything in common.

The BSC members spread rumors about a boy named Chris from SHS, who supposedly likes her in Mary Anne's Makeover. Another rumor is that Carlos Mendez invited Mary Anne to the Winter Dance at SHS.

After Logan and Mary Anne break up Dave Griffin and Pete Black asked her to the Fall Fling.

She is portrayed by actress Rachael Leigh Cook. Mary Anne's hair is short, which matches the hair cut she got in Mary Anne's Makeover.

Kristy, Claudia, and Mary Anne at 5 years old, the members of the Snowperson Builder's Club

Mary Anne and her kitten, Tigger

Alma Baker Spier with Mary Anne as a baby 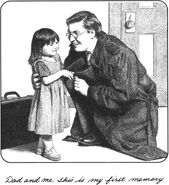 Richard Spier with Mary Anne as a baby 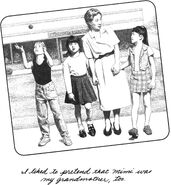 Kristy, Claudia, and Mary Anne in kindergarten with Mimi Yamamoto 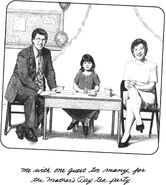 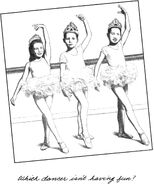 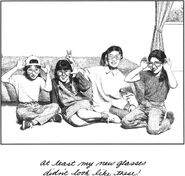 Mary Anne and her grandmother with their award-winning quilt

Mary Anne's Scrapbook
Add a photo to this gallery 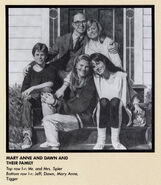 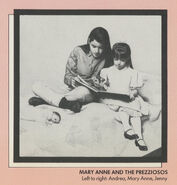 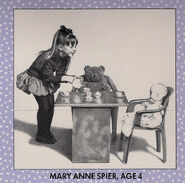 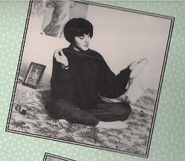 Mary Anne sewing in her room, from the 1994 BSC calendar. 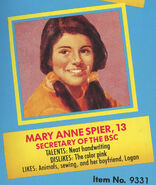 Mary Anne's picture and bio circa 1991 on the box of the Remco BSC dolls. 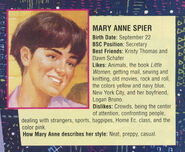 Mary Anne's profile from a Baby-sitters Collectors Club poster.
Add a photo to this gallery

Dawn, Mary Anne, Kristy, and Claudia
Add a photo to this gallery
Retrieved from "https://babysittersclub.fandom.com/wiki/Mary_Anne_Spier?oldid=25011"
Community content is available under CC-BY-SA unless otherwise noted.