The Baby-sitters thought Mary Anne and Logan would be together forever...

Lately, Mary Anne's been feeling like she and Logan are spending too much time together. They fight over silly things. And Mary Anne never gets to do what she wants to — like read, and baby-sit, and be with her friends.

But when Mary Anne suggests that she and Logan see less of each other, Logan takes it all the wrong way.

Could this really be the end of Mary Anne and Logan?

Mary Anne is worried about her and Logan's relationship - he is too pushy and sort of demanding. Mary Anne's dad thinks that they need to spend less time together, but when she tries to tell Logan that he takes it the wrong way. So while Mary Anne is baby-sitting for Jamie Newton Logan knocks on the door. Mary Anne replies, "What are you doing here?" Logan says, "You missed our date!" They fight and argue in front of Jamie Newton. Logan runs out the door, and Mary Anne starts crying and Jamie makes her feel better by saying "It's okay Mary Anne." After awhile Mary Anne gets paid by the Newtons and leaves. The next day at school Logan comes to school and says "Mary Anne I think......

Mr. Prezzioso has a surprise baby shower for his wife and has the BSC help set it up. By the end of the book, Andrea Prezzioso is born.

Mary Anne was the first member of the Baby-sitters Club to have a steady boyfriend. However, I know from letters that I receive from readers that lots of girls do not have boyfriends at all when they’re Mary Anne’s age. So it seemed reasonable to me that Mary Anne and Logan would break up at some point. Also, in the past Mary Anne has had problems in her relationship with Logan.

It isn’t easy for Mary Anne to stick up for herself. But when something is very important to her — such as standing up to her father when she felt he was treating her like a little girl — then she will do it. I knew that some readers would be disappointed by this book, but I felt it was a realistic direction for Mary Anne and Logan’s relationship to take. And who knows what the future may bring? 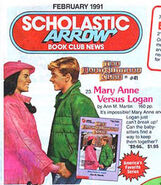