Ms. Jean Colman is a second grade teacher at Stoneybrook Academy and Karen Brewer's teacher. She teaches a class of eighteen students. She is very patient and doesn't yell or scold.

She attends the Winter Festival in Karen's Sleigh Ride with her husband and daughter.

In Karen's Wedding, it's revealed that she doesn't live in Stoneybrook. She lives out in the country and her house is surrounded by woods. Her mother lives in Chicago and her sister lives in Oregon and could not come to the wedding. Her sister's family and mother ended up coming to the wedding. Her sister is named Pat Bradley and her brother-in-law is Doug Bradley and they have a daughter named Caroline. They went to Niagara Falls for their honeymoon.

In Karen's Gift, her mother mentions that Ms. Colman had a lot of energy and spoke loudly in the house. Her mother would tell her to use her indoor voice, which Karen thinks she got the idea from.

Ms. Colman reads the Alice in Wonderland story to the class

Natalie Springer, Leslie Morris, Tammy Barkan, and Jannie Gilbert sit in the auditorium next to Ms. Colman while play director Mrs. Graff works with the actors

Ms. Colman explains to the class that Mrs. Morris won't be directing the Alice in Wonderland play anymore, and Natalie will be taking over as Tweedledee for a day or two, until Leslie changes her mind 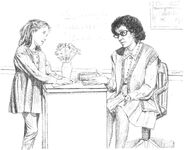 Leslie confesses to Ms. Colman that she tried to wreck the play

Natalie tells Ms. Colman her idea that when their stuffed animal's adventure is over, the class could make an album to give kids at the hospital

Ms. Colman hands Buzzy Bear to her friend Susan Ying, who is on her way to the airport, while Natalie waves bye to Buzzy

Natalie asks Ms. Colman when the mail comes to school, as she awaits a postcard from Buzzy 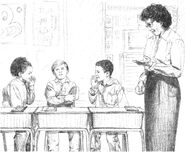 Ian Johnson is annoyed at his classmates' behavior, while Omar and Sara argue over whose snowfort is better

Ian works with Chris and Ms. Colman at the snowflake booth at the winter carnival

Ms. Colman explains their school's readathon to the class

Ms. Colman asks Terri Barkan questions about the books she just read, Becky Morton and the Snowstorm, which she can't answer because she read the book too fast

Ms. Colman takes Terri to the principal's office after she was caught cheating, in order to call her parents

Jim, an employee at Pet Time, gives Ms. Colman a mouse, which Karen and Sara later name Hunca Munca, that Jim thinks will have babies soon

Audrey apologizes to Ms. Colman for breaking Jannie's peach and not telling the truth about what happened

Ms. wearing funny glasses next to other kids in costume in the gym for the Halloween parade.
Community content is available under CC-BY-SA unless otherwise noted.
Advertisement