They're not sleeping until they see all of it —

The Baby-sitters have always wanted to be sophisticated New Yorkers like Stacey. Well, now here's their chance: Stacey has invited them all to the city for a vacation!

In between shopping and seeing the sights, the Baby-sitters manage to have plenty of excitement. Jessi meets a boy ballerina, Claudia and Mallory take fancy art lessons, and Kristy makes a special friend. Dawn eats her way through the city, and Stacey and Mary Anne have a baby-sitting mystery!

Is New York as good as they've always dreamed? You bet! 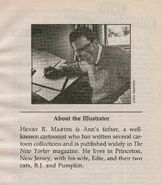