New York City is where BSC Treasurer Stacey McGill used to live before she moved to Stoneybrook at the beginning of seventh grade. The baby-sitters visit and tour NYC occasionally during the series. Karen Brewer also visits NYC several times in the Baby-Sitters Little Sister series.

NYC in the BSC FranchiseEdit

Before she moved to Stoneybrook, she went to a private school where she didn't have to wear uniforms. Stacey also would take the subway to school and once took the subway out to Coney Island. Stacey's best friend in NYC was Laine Cummings, before they had a falling out. After Stacey's parents get divorced, her father moves back to New York City, and Stacey visits him there occasionally.

Karen Brewer has a pen pen who lives in NYC, Maxie Medvin. Karen visits her there a few times.

VHS cover
Add a photo to this gallery

Claudia's sketch of the skyline 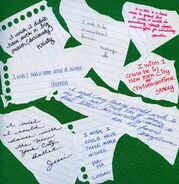 Stacey's Secret Santa wish is to be in NYC at Christmastime.

Stacey's sticker in the 1992 BSC calendar has an NYC skyline motif.
Add a photo to this gallery
Retrieved from "https://babysittersclub.fandom.com/wiki/New_York_City?oldid=18157"
Community content is available under CC-BY-SA unless otherwise noted.