Nicholas "Nicky" Pike, sometimes called Nick-o, is Mallory Pike's 8 year old brother. A member of the Pike Family, he has 3 brothers and 4 sisters. He lives with his family in Stoneybrook, Connecticut, where he was born.

Nicky wears glasses. Like all the other Pikes, he has blue eyes and reddish-brown hair.

Nicky and his family have gone to Sea City, New Jersey, for a vacation every year for a long time.

Nicky often wants to play with his brothers but they think he's babyish and often won't play with him. When Mallory wrote a play based on her family, she originally called Nicky "Ricky." Nicky objected and became known as "Ed" because he thought it was a cool name.

Nicky broke his finger in Hello, Mallory when he played volleyball against Buddy Barrett. It was revealed he had broken a bone when he fell out of a tree, as mentioned in Book #13 Good-bye Stacey, Good-bye.

He is a big ball of energy and a champion hider. He once made Dawn think there was a ghost in her house when he hid in the secret passage on the Schafer property in The Ghost at Dawn's House. He left some of his garbage and a penny from his penny collection in the passage.

In Karen's Lemonade Stand, Nicky started to sell popcorn near Karen's lemonade stand before and after Krushers games. He finally joined in on the game against the Bashers.

In Mallory Hates Boys (and Gym), he got traded with the Hobart boys for one night in the book. He was great and asked about Mr. Hobart's slide show. When Mallory made the archery team, he teams up with his brothers and makes her a cake that said "Mallory Congradulations" on it.

Nicky and Jackie were acting odd in Stacey's Secret Friend. Nicky Pike acted as his bodyguard until the situation about a baseball jacket was resolved.

Sometime prior to Chapter 9 in Kristy in Charge he and his friends stomped on all of the bushes by the driveway the other day while trying to catch a ball. His parents thought that Pow did it.

He moves into Margo and Claire's old room in The All-New Mallory Pike, after Mallory goes to boarding school. He now rooms with Byron.

He played as Bashful in the Snow White video for Dawn Schafer in Jessi and the Bad Baby-sitter.

He bought stain remover in the mail only to discover that it didn't work. He also bought a glass marble and pamphlet about colleges in Minnesota. Later he ends up selling the things he bought in Stacey's Choice.

He was in Jessi's group when the BSC took their clients to Sudsy's Carnival in Kristy and the Mother's Day Surprise.

In Kristy and the Walking Disaster Nicky woke up before the game against the Bashers with a sore throat, when he was supposed to pitch. David Michael ended up pitching in his place.

In Kristy and the Mystery Train, he is one of Derek's guest on the train ride to promote his new movie with a few friends. He becomes friends with Greg, one of Derek's friends from California during the trip.

He meets Linny Papadakis in Baby-sitters at Shadow Lake through David Michael Thomas. They play together and get in a fight with Karen Brewer, Hannie Papadakis, and Nancy Dawes over a old shack found on the property.

He is played by Jonah Bliss.

Nicky is in three episodes and played by Connor O'Mahony.

Nicky in the Neflix series 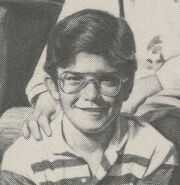 A close up headshot of Nicky
Community content is available under CC-BY-SA unless otherwise noted.
Advertisement