Nine O'Clock Island is an island located off the coast of Stoneybrook in Long Island Sound. It is southwest of Green Point Island. The island only appears in Baby-sitters' Island Adventure.

The island is where Claudia, Dawn, Jeff, Becca, Jamie, and Haley are marooned after a storm blows up during a sailing race.

The island has a small woods area, sand, rocks, a cave, and a gnarled tree. The cave is described as huge pile of boulders, three of them had formed a gigantic triangular space. It is high enough to walk into without bending over, and definitely wide enough and deep enough for six people. 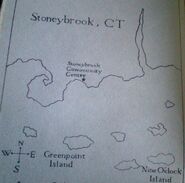