Start a Wiki
Omar Harris is a student in Ms. Colman's class at Stoneybrook Academy. He makes an appearance with his brother, Ebon, in Happy Holidays, Jessi.

In Second Grade Baby, Omar cut himself by accident and the cut got infected. He spent two days at the hospital and did not bring in a toy for the class project.

He and his friends were picking on Pamela Harding in Baby Animal Zoo for not liking animals, after she teased him for not going up high on the jungle gym. If she didn't hold a baby animal, he and his friends would wear a shirt that says Pamela is the Biggest Baby at Stoneybrook Academy to school everyday for a month.

He and his family have a sheepdog named Buster, which Omar brought in for Pet Day. 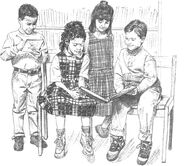 Ms. Colman's students deciding which guinea pig to buy at the pet store. Eventually they buy Hootie.
Add a photo to this gallery
Retrieved from "https://babysittersclub.fandom.com/wiki/Omar_Harris?oldid=19956"
Community content is available under CC-BY-SA unless otherwise noted.