Patrick Thomas is a minor character in The Baby Sitters Club books by Ann M. Martin. Patrick is Kristy Thomas' real father and the ex-husband of Elizabeth Thomas. Patrick has only been seen once in the books, but has been mentioned quite a bit. He was part of one of the main plots in The Summer Before when Kristy kept hoping her father would return for her birthday.

He had four children with Elizabeth : Charlie, Sam, Kristy, and David Michael. One day, when David Michael was just a newborn baby, Patrick just walked out and never came back. He left Mrs. Thomas to look after four kids on her own, including a newborn baby. Kristy has said that she and her brothers never see their father, he never writes or calls, and they haven't seen him in years. Patrick forgets his kids' birthdays and doesn't send much child support money. During the series, he lives in Marina, California and had remarried by the time Kristy was in sixth grade.

Kristy tried to write a letter to Patrick in the BSC Prequel The Summer Before, but he didn't respond.

He is divorced from Mrs. Thomas, who has now remarried and is Elizabeth Thomas-Brewer. It was a pretty messy divorce.

In Kristy's Book, Kristy recalls how recently, "last spring", Patrick came to Stoneybrook and met up with her several times, but she had to keep the meetings secret from her family, because he wanted to meet up with only her and not her brothers, and he didn't want Elizabeth to know. Kristy keeps the secret for a while but it is very stressful for her to complete her household chores and come up with enough lies to cover for meeting up with him. He gives her a baseball glove, but it is a right-handed glove and she is left-handed. Eventually, she can't keep it secret any longer and tells Watson she has been meeting up with her real father. One day, Patrick leaves town and doesn't show up for a planned meeting, and Kristy tells her mother the truth.

He now lives in San Francisco and is married to Zoey Thomas. He doesn't have a good relationship with Charlie at all. When Kristy saw him at the Giants game, he forgot to ask how Charlie, Sam, and David Michael were. When the time of his wedding with Zoey came along, he didn't invite David Michael.

It has never been explained why Patrick left them but it has been said it might be because he didn't want the responsibility that came along with having four kids and just left. It is unknown if he knows that Elizabeth is remarried or if he even cares. He does know where Elizabeth lives though.

In the movie, he was a sports writer. In Mind Your Own Business, Kristy!, Kristy mentions that her dad used to play in the minor leagues. When Kristy was in sixth grade, he moved around a lot and worked temporary jobs. 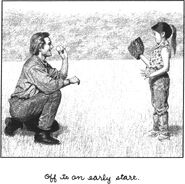 Patrick playing catch with Kristy when she was five years old.

Kristy and her dad bowling.
Add a photo to this gallery
Retrieved from "https://babysittersclub.fandom.com/wiki/Patrick_Thomas?oldid=22779"
Community content is available under CC-BY-SA unless otherwise noted.