All the Pikes have blue eyes and dark red-brown hair, though Mallory is the only with curly hair and hers is more reddish. All the kids get chicken pox in Kristy and the Snobs, except Mallory who had it once before catching it again in Dawn's Wicked Stepsister.

Great-grandfather Pike had ten brothers and sister, all of whom had names that started with "P" (including a Peter, Prudence, Paul, and Polly) in Mary Anne and the Secret in the Attic. Mr. Pike keeps a box of old family papers and newspaper clippings.

Dee Pike's maiden name is Bennett. Her family was originally from Ireland and England, but one branch moved to the U.S. in the 1950s. She has at least one cousin, Gillian Orton, that lives in England. Gillian keeps track of the family tree. In Baby-sitters' European Vacation she shows Mallory the family history book. They are distantly related to William Shakespeare.

Sitting for the Pike kids is not for the fainthearted: sitters have to be part traffic cop, part referee and part camp counselor. If a sitter survives a job with them, he or she can sit for anyone.

They are friends with the Prezzioso Family.

Margo and Claire are the first kids in the family that's introduced in Kristy's Great Idea.

Every summer for nine years the family goes to Sea City. The only summer they didn't go was in Abby in Wonderland. The money they would use to go to Sea City was used to fix one of the cars. They "vacation" in the backyard with a make shift beach theme with kiddie pools and super soakers.

It's mentioned in Kristy and the Secret of Susan, Mallory mentions that kids used call them The Spiders due to how many kids are in the family. They all hated the name.

Byron begins a lending library out of their rooms in Jessi's Baby-sitter: open weekdays 3:30pm to 6 pm and weekends 10am-5pm, not during meals.

In Poor Mallory! the kids all band together to help when their father loses his job. They try to find a way to help raise money so they weren't broke. When John finally gets a job, they celebrated with burgers and watched home videos.

Mallory took all her siblings on a scavenger hunt and small neighborhood events in Mallory on Strike, as their own special day.

All of the kids participate in creating the Official Thomas Book of World Record's in Kristy + Bart = ?.

In Stacey's Movie the kids were all being filmed by Kristy for her Short Takes video project.

Margo, Claire, and (sometimes) Vanessa and Nicky attends the play group the BSC hosts in Claudia and Mean Janine. Mallory was offered the chance to be a baby-sitter in training.

It is not far from Bradford Court. Mr. and Mrs. Pike have been living there for over twelve years. Maureen Spencer lives behind the family and Mrs. Murphy is the neighbor. The yard has an apple tree and a cherry tree at the end of the driveway.

The House has a rec room on the bottom floor with a ping pong table and couches.

Trees prevent Mallory and Stacey McGill from seeing into each other's back windows. The backyard fence has daffodils poking up around borders. There's a toolshed in the backyard in Good-bye Stacey, Good-bye. The back screen doors leads to the kitchen.

The basement has a big sink and Mr. Pike's workbench. They store some of their beach stuff in an attached garage.

Mallory and Vanessa have window that over looks the backyard in Mallory and the Mystery Diary.

They have a basketball hoop above the garage mentioned in Dawn and the Big Sleepover.

Their kitchen table is long with a bench on either side and a chair on each end. The chairs are for John and Dee and four kids to each side in Jessi's Secret Language.

There's a giant desk of Mr. Pike's that sits in the den.

The Pike Triplets with Derek Masters and Jessi Ramsey

#34 Mary Anne and Too Many Boys

The Pike family in the graphic novels 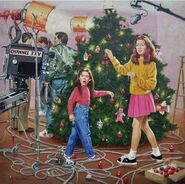 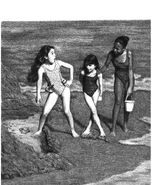 Margo and Claire
Community content is available under CC-BY-SA unless otherwise noted.
Advertisement