There's some bad news in the Pike family: Mallory's dad has just lost his job. And since money is going to be tight until Mr. Pike finds a new job, all eight of the Pike kids decide to help out.

Nicky gets a paper route, Vanessa tries selling her poetry, and Mallory takes baby-sitting jobs in Kristy's ritzy neighborhood. But being around the Delaneys only makes Mallory feel poor. They have a cat that cost $400 and tennis courts in their backyard!

Poor Mallory! She needs the Baby-sitters now more than ever!

In the previous books it was alluded to that Mallory's dad might lose his job, but no one was really worried except Mr. and Mrs. Pike. Then one day Mallory comes home to find that her mother has a headache. She goes upstairs and finds that the company in Stamford that her father works for is firing about half of the people—and Mr. Pike thinks that he will be next.

It is revealed that he is right, and a pink slip is given to him. So the Pikes start saving and earning money. Mallory gets a baby-sitting job for the Delaneys (a.k.a "the Snobs"), the triplets have a yard service, Nicky gets a paper route, Vanessa styles hair, and Margo and Claire sell lemonade. Mallory and her brothers and sisters are making money, but losing friends.

Kids start teasing them and spreading rumors about why Mr. Pike lost his job. They learn who their true friends are. Meanwhile the Delaney kids are having the same problem, in reverse. They have just got a new pool and kids from all over the neighborhood want to come and play. Mallory helps them out though. They tell their friends that there is a new rule that when a baby-sitter is in charge no one can use the pool. Then they invite their friends over.

In Poor Mallory!, the Pike kids think of all sorts of ways to earn money after their father loses his job. Vanessa even styles her schoolmates’ hair on the playground! When I was young I found plenty of ways to earn money, too. I did lots of baby-sitting, of course. But I also weeded gardens, watched neighbors’ houses while they were on vacation, and even dog-sat. If you are too young to baby-sit or are not interested in it, but would like to earn some money, there are lots of things you can do. Start an odd-job service like the Pike triplets did. Are there pets in your neighborhood? Try dog-walking or pet-sitting. If you have a special talent like Vanessa does, you could make and sell your own jewelry, or your own hand-sewn creations. The possibilities are endless — use your imagination! 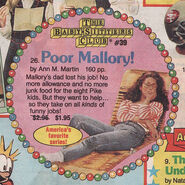