The Baby-Sitters Club Wiki
Register
Don't have an account?
Sign In
Advertisement
in: Cities in Massachusetts, Places, Cities and Towns, Places to stay

Shadow Lake is a resort area located in the western Massachusetts mountains. There are opportunities for water sports (water skiing, boating, etc.) in the summer and skiing in the winter. Watson first came to the area since he was a young boy.

There's row of shops and a giant lodges with cabins around the area. Dawn Schafer hears about a mystery and the lake having a monster in it. There's a small island in the middle of the lake.

Watson Brewer went to Shadow Lake to visit his aunt Faith and uncle Pierson to stay at their cabin growing up. The last time he was there, he was twelve years old. He mentions that he'd come home in tears wishing he never left.

When Faith and Pierson were rewriting their wills, she thought of Watson and wrote to him about possibly inheriting it. Faith suggested that he come and stay at the cabin to see how he likes it. She also wished to meet his family and catch up.

Members of the BSC on the beach of the lake

Outside of Watson Brewer's Cabin

Karen and Andrew Brewer on the slopes

The cabin at Shadow Lake 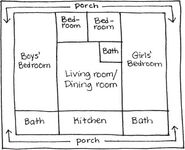 Birds' eye view of the cabin, showing the different rooms.

Jessi and Daniel at the barre.

Claudia, Dawn, and Kristy on the Faith Pierson

Dawn and Mallory next to the campfire on Shadow Island

Mary Anne and Claudia next to the campfire on Shadow Island

Stacey and Sam at the dance at the Shadow Lake lodge

'Summer Trip at Shadow Lake' book to be given to Watson
Community content is available under CC-BY-SA unless otherwise noted.
Advertisement