Can you believe it?? Everyone in the eighth grade of my school has to write an autobiography. So I've been looking through photo albums and trying to remember the past — the good and the bad. Like when I was five and got to be in the Macy's Thanksgiving Day parade. And when I was eight and Laine and I got in BIG trouble. I've been writing about my life before diabetes, before the divorce, and even before Stoneybrook and the BSC. In fact, everything right up until this minute. So this is my life — welcome to it!

When I Was Five[]

When I Was Eight[]

When I Was Twelve[]

Stacey and Randal Peterson the Third at Ballroom Dance class 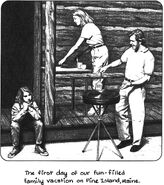 Stacey at 10 years old with her mother and father on Pine Island.

Map of Pine Island, Maine, where Stacey's family vacationed when she was 10 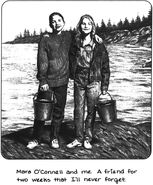 Claudia and Stacey during a trip to NYC.

Stacey on the steps of the Metropolitan Museum of Art