"Mary Anne and the Brunettes"

"The Baby-sitters and the Boy Sitters"

The Baby-Sitters Club is a TV series Scholastic, Inc. produced in 1990 based on the original book series, which aired on the Disney Channel, HBO, and Nickelodeon. Thirteen episodes were filmed before the series was canceled. Each episode was released on a VHS tape. A reboot was released by Netflix in July 2020. The series first aired from January 1, 1990 to March 26, 1990 on HBO.

Main: Say Hello to Your Friends.

The videos were filmed in Pelham, NY. Casting picked from over 500 girls between the ages of 10-14. Nicole Leach, who played Jessi, was "the Baby-sitters Club expert" and had every BSC book.

The episodes were originally released on VHS by GoodTimes circa 1990-1992, and later released with different covers (but the same cover art) by KidVision circa 1993-1995. The KidVision VHS tapes came with extras such as stickers, a temporary tattoo, or a Collector's Mini Book.

Episode 1 Mary Anne and the Brunettes

Episode 2 Dawn and the Haunted House

Episode 4 Kristy and the Great Campaign

Episode 6 Claudia and the Missing Jewels

Episode 7 Dawn and the Dream Boy

Episode 8 Claudia and the Mystery of the Secret Passage

Episode 9 Jessi and the Mystery of the Stolen Secrets

Episode 10 The Baby-sitters and the Boy Sitters

Episode 8 Claudia and the Mystery of the Secret Passage

Episode 10 The Baby-sitters and the Boy Sitters 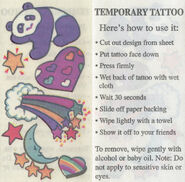 The videos were also released by Warner Music on laser disc with 3 episodes per disc, for a total of a 90 minute run time.

All episodes from the series have been released digitally on Amazon.com, YouTube, Google Play, Vudu,and iTunes. The episodes are a mix of the releases on the GoodTimes and KidVision VHSs and are released complete out of their airing order.

Behind the Scenes feature in a 1990 BSC Fan Club newsletter