Instead of exchanging gifts this Christmas, the Baby-sitters are going to hold a special Secret Santa drawing. Each club member puts one wish in a hat, and then draws someone else's wish to grant. What do the members of the BSC want for Christmas? Read on!

Inside is a whole mailbag of greeting cards, letters, and notes sent to and from the Baby-sitters. Open their mail to discover how the BSC Secret Santas turn out — and how Kristy, Claudia, and the rest of the club make a little girl's Christmas the best ever.

One Christmas, the Baby-Sitters Club decides to do a Secret Santa drawing of their Christmas wishes. The book chronicles each member's Christmas letters and postcards to family and friends as they work to grant the wish of the person they chose.

The baby-sitters also decide to play Santa Claus to a girl named Eliza Stanley through an organization known as Santa's Helpers.

Karen and Claire also write letters to Santa Claus asking him various questions and for various toys. Claire had Margo write hers for her. 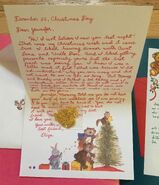 Dawn's card to Mary Anne and the BSC's letter to Mr. and Mrs. Stanley, regarding Eliza's letter to Santa

Beth Stanley's card to Kristy and the BSC

Claudia's card to Dawn and front of Jessi's card to Stacey

Claudia's card to Shannon and Karen's Hanukkah card to Nancy 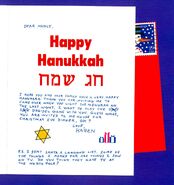 Karen's Hanukkah card to Nancy inside

Dawn's card to Cam Geary asking him to write to Mary Anne, and envelope of Logan's card to Mallory

Certificate from Petersons' nurseries regarding a tree in honor of Mallory, and Logan's note to Mallory

Back of envelope of Logan's card to Mallory, and front of Shannon's card to Jessi

Claire's letter to Santa and envelope of Kristy's card to Dawn

Envelope of Eliza's card to Jennifer and Mallory's letter to Claudia 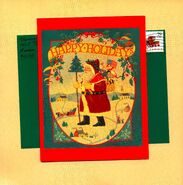 Front of Kristy's father's card to her 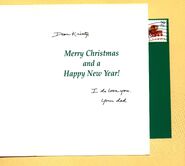 Inside of Kristy's card from her father
Community content is available under CC-BY-SA unless otherwise noted.
Advertisement