Tiffany Kilbourne is the eleven-year-old middle sister of Shannon Kilbourne and Maria Kilbourne. She attends Stoneybrook Day School with her sisters.

Tiffany is described as is tall with blonde hair, blue eyes, dark eyelashes, and high cheekbones. Shannon says that her mother looks more like her. In Shannon’s Story, it's noted that she wears her hair short.

She used to be quiet, but has now turned into a brat. She doesn't get along with Maria, doesn't do well in school, never does her homework, and her room is a pigsty. Tiffany takes up gardening as a hobby and is raising spinach in her garden. Her teacher has sent notes home about her.

In Kristy and the Sister War she and Maria start to feel left out and hurt when her parents and Shannon were too busy for them. After failing to help Shannon as best as they could, they started a prank war against her. They also plan the all kids dance for the community. She and Maria fight over Jordan Pike before dancing with Byron at the dance. Shannon, Tiffany, and Maria all get make up at the dance.

She goes with Shannon and Maria to the Kormans when Claudia Kishi is sitting. They build a snow village.

#112 Kristy and the Sister War 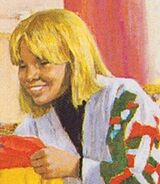 A close up headshot of Tiffany
Community content is available under CC-BY-SA unless otherwise noted.
Advertisement