Everyone knows the Baby-sitters. But how well do you know really know them? Now you can test yourself and your friends with The Baby-sitters Club Trivia & Puzzle Fun Book. All the secrets you've ever wanted to know about the Baby-sitters are hidden in the games, crosswords, word jumbles, and word searches inside! So put on your thinking cap and... go for it!

One day Kristy had a great idea. Wouldn't it be easy if a parent who needed a baby-sitter could call one number and reach four experienced baby-sitters at once! That was a long time ago, and since then Kristy, Claudia, Mary Anne, and Stacey have welcomed alternate officer Dawn Schafer, junior officers Mallory Pike and Jessica Ramsey, and associate members Logan Bruno and Shannon Kilbourne into their club. But that's only the beginning of the adventures of the kids in the BSC. How much do you know about their adventures? How well do you really know the kids in the club?

Now you can quiz yourself and your friends on all of the fun facts about The Baby-sitters Club. So sharpen your pencil and turn the page because the BSC is waiting! 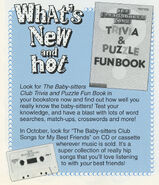