Vanessa Pike is Mallory Pike's nine-year-old sister and a member of the Pike Family. She lives with her family in Stoneybrook, Connecticut, where she was born.

Vanessa has blue eyes and red-brown hair. Vanessa, like Mallory and Nicky, wears glasses. It's mentioned she has freckles in Stacey's Lie and Stacey's Choice.

Vanessa is a daydreamer and is often lost in her own little world. She loves writing poetry and reading and is a little like Mallory. She wants to be a poet and speaks in rhyme often, which drives everyone crazy. When Mallory wrote a play based on her family, Vanessa became "Ranessa." Mallory used one of Vanessa's poems in her play. In Claudia and the Little Liar, Haley calls her a brain, saying that she's really smart.

She shares a bedroom with Mallory. She is a slow-poke and has to be woken up 20 minutes before everyone on school days so she can be ready for school on time. She'd ask Mallory if the weather was sunny or cloudy before getting up so she'd know what to expect when she got up. When Mallory left for Riverbend Hall Boarding School, she got her own room for awhile, but then she shared a room with Margo and Claire. Nicky now gives her the weather report.

She entered her family into a contest about having an old fashioned Christmas and won, leading to the family being followed around by cameras for a holiday season.

Vanessa and her family have gone on vacation to Sea City, New Jersey, every year for a long time. She once had a crush on Chris at the ice cream parlor in Sea City and writes him poems. He thinks that Mallory wrote them. Vanessa decides not to correct him and writes one last poem pretending it's from Mal.

In Abby and the Mystery Baby she gets upset when her family starts writing poetry themselves, but eventually is pleased that everyone liked poetry so much. She was the emcee for the poetry slam the BSC hosted at the Stoneybrook Public Library.

In Kristy and the Cat Burglar she went through a "Harriet the Spy" phase.

In Kristy in Charge Vanessa starts to teach poetry to her siblings after getting inspired by Mallory teaching. She eventually starts to force her lessons on her siblings via blackmail and being strict. The rest of her family rebels against her until they come to a compromise.

Vanessa becomes a cheerleader for Kristy's Krushers. She dressed as one of the Three Stooges with Charlotte and Haley to cheerlead the Krushers' World Series in Kristy's Mystery Admirer. In Abby the Bad Sport she and the other cheerleaders cheer for the Special Olympics Unified Team.

In Jessi and the Troublemaker, Vanessa was in the car when Danielle Roberts was "playing" let's go on a picnic. Danielle tried driving around the cul-de-sac with Vanessa sitting in the front. When Danielle saw Jessi Ramsey, she couldn't put the brakes on and smashed into a parked car. Vanessa hit her head against the windshield and ended up needing stitches. Vanessa and her friends wouldn't talk to her after the accident. Stacey McGill helped them stop fighting.

Vanessa played the woodsman in the BSC production of Snow White and the Seven Zorbs in Jessi and the Bad Baby-sitter. She also likes troll dolls and fails to see Margo stealing in the book.

She thought of the promise campaign in Get Well Soon, Mallory! for Stoneybrook Manor.

Like the other kids in the neighborhood, she bought freckle remover in the mail only to discover that it didn't work. She also bought a bracelet fastener and a bust developer. Later she ends up selling the things she bought in Stacey's Choice.

She was in Stacey's group when the BSC took their clients to Sudsy's Carnival in Kristy and the Mother's Day Surprise.

Vanessa keeps a fat notebook with all her poems. When she writes poetry she does it in private. She says that daydreaming helps her create new concepts for poetry. In Mallory and the Trouble with Twins Jessi and Mal sit for all the Pike kids on a rainy day. Vanessa is in her room inspired by the rain for her next poem. She eventually stopped speaking in rhyme.

In this version she is played by Bridget Kate Geraghty.

Actress Daphne Hoskins plays her in this series. She is in 3 of the 10 episodes.

Vanessa Pike in the Graphic Novels 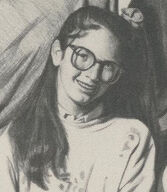 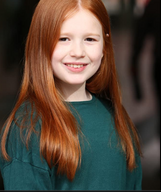 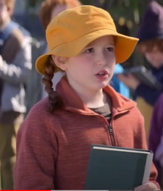 Vanessa Pike in the
The Baby-Sitters Club (Netflix series)

Vanessa in her cheerleading uniform on the cover of Dawn and the Disappearing Dogs with Dawn Schafer and her sister Mallory
Community content is available under CC-BY-SA unless otherwise noted.
Advertisement