Whitney Cater is a twelve year old girl in Palo City, California who has Down Syndrome. Her parents are James and Annette Cater. She was introduced in Dawn and Whitney, Friends Forever.

She is a short, somewhat stocky girl, with straight brown hair, and brown eyes that seems to slant slightly at the corners. Her face is round and she has a short nose. Her voice is low, almost hoarse, she speaks carefully. You cannot really tell that she has Down Syndrome.

Prior to her introduction to the series, Whitney had been attending a special school with a specialized summer program. Her parents plan to mainstream her in the public school system in the fall and need someone to look after her a few afternoons a week. Dawn takes the job in book #77 and Whitney is told Dawn is there as a friend rather than as a baby-sitter to help foster Whitney's independence.

She is prone to ear infections, has to wear special ear plugs when she goes swimming and put drops in before and after. Otherwise she has no allergies or anything that necessitates worry. She will continue to take special courses and work with specialists, like her speech therapist.

Her parents describe her as easygoing, sympathetic, sensitive, friendly, and outgoing. Her disability is mild and there are no other major side effects from having Down Syndrome. She is capable of doing many "normal" activities including folding the laundry. Whitney is on the swim team and has won many trophies. She also would like to learn how to baby-sit. Whitney is a fair individual who helped avert a minor fight between Clover and Daffodil Austin.

Whitney is the victim of subtle discrimination when she and Dawn go shopping at Hudson's Department Store. Whitney is sampling perfumes and a saleslady treats her and Dawn rather rudely.

Whitney would like to be treated more like a grown-up. She wishes for pierced ears like Dawn's. When they go shopping, Whitney buys stick on earrings shaped like hearts. She also has a "grown-up" purse. Dawn gives Whitney a green bear she won at the carnival thanks to Clarice Dubina. Whitney names the bear Buster, but then hides him in a closet because she thinks he is baby-ish.

Her room is a typical girl's room decorated in green and white and soft peach. A big canopy bed stands in the middle of the room with a patchwork quilt across the foot, a wide desk with a chair by the window, next to a comfortable looking armchair. Bookshelves line one wall and on the other wall is a big poster of seals cavorting in the ocean. She keeps a stack of magazines on the bottom of her bookshelf. A small mirror hangs above her chest of drawers. 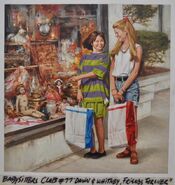 Book #77 Dawn and Whitney, Friends Forever
Add a photo to this gallery
Retrieved from "https://babysittersclub.fandom.com/wiki/Whitney_Cater?oldid=21672"
Community content is available under CC-BY-SA unless otherwise noted.